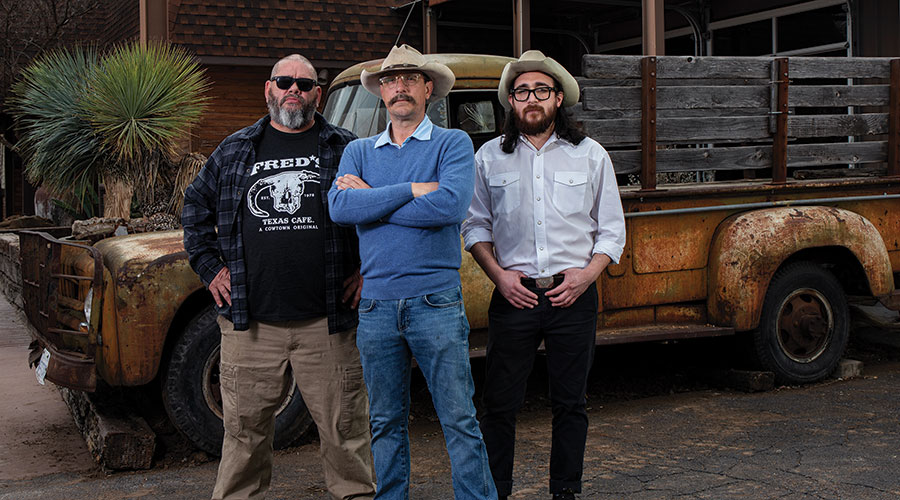 The Return of Fred’s

By June Naylor
Above photo by Ralph Lauer

With a new location, bigger kitchen and, yes, better parking, the cafe brings back old favorites and familiar faces

Relocating this spring to western Camp Bowie Boulevard, the new Fred’s Texas Cafe is a trip to the past. And with a bigger kitchen and dining room, it’s also a look at its future.

After more than 40 years occupying a tiny sliver of real estate on Currie Street, Fred’s made the surprise announcement that it was closing/moving last October. The news saddened devotees of the giant, frosted schooners of beer and some of the best burgers and fries in town, although, in recent years, the location had lost its appeal. The problem? Over the past decade, Fred’s languished in an area heavily populated by bars with a much younger clientele.

“On closing night, New Year’s Eve, I was reminiscing, wandering the area around Currie Street,” says Quincy Wallace, Fred’s co-owner. “And all I could see were people taking selfies on their phones. It just wasn’t the place for our crowd anymore.”

But Wallace promises all the feels in the reincarnated Fred’s, now occupying a building opened in 1966 as Fort Worth’s first Steak and Ale (and one of the earliest in the Dallas-based chain) and serving more recently as home to Buffalo West, which closed in the summer of 2020.

Wallace, who has overseen months of renovations, took us on a tour of what we’ve nicknamed Fred’s West. (Fred’s North, off Interstate 35, opened in 2011 and is still going strong.) The original fireplaces remain, all in working order, in the bar and dining rooms. The faux English tavern look is gone, replaced by recycled corrugated barn tin and Fred’s funky decor. 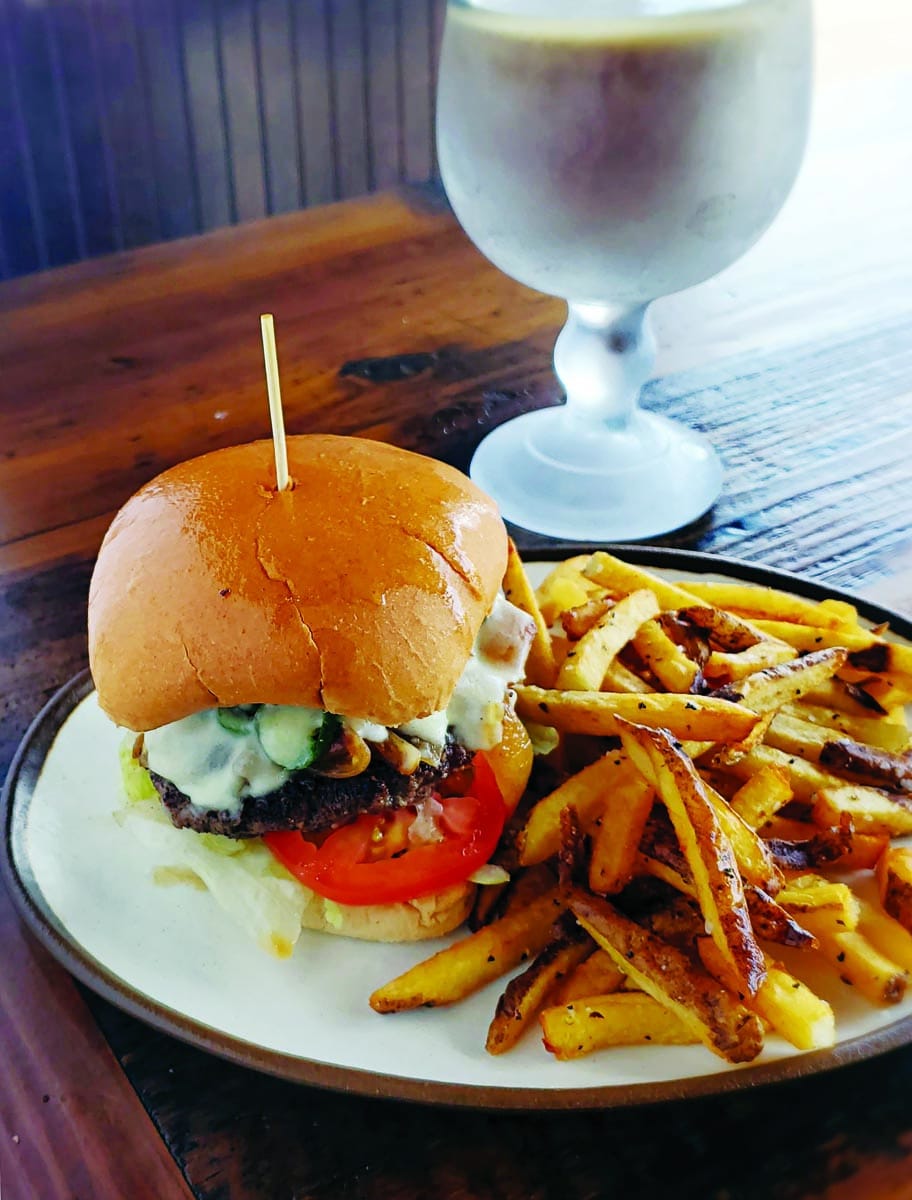 Burgers will still be a mainstay at Fred’s, as will the hand-cut fries and frosty mugs of beer. Photo by Meda Kessler 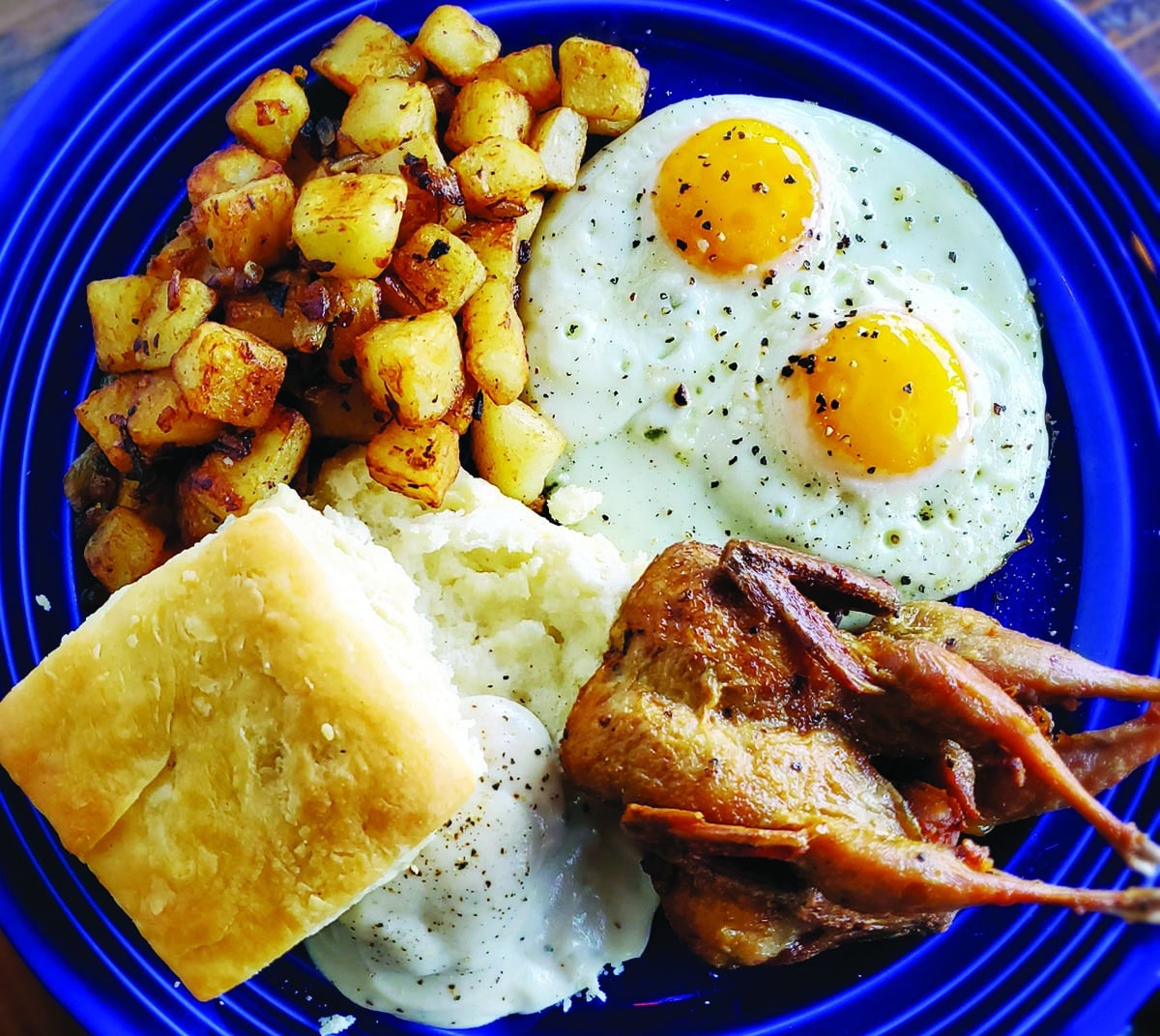 Brunch means big biscuits made even better with a side of cream gravy. Photo by Meda Kessler

In particular, you’ll find the signature trappings of Currie Street Fred’s in a spacious front dining room: the booths upholstered in sparkly gold vinyl, buffalo skulls, old ranch brands and other cowboy memorabilia, and faded photos of the characters long associated with the restaurant. Other dining spaces — and there are several as this place seats about 200 — are warmed up with wood paneling. Behind the bar, an enormous covered patio features a stage for live music and roll-up garage doors, remnants of Buffalo West. There’s also a small patio with fire pits.

Regarding characters found in old pictures, the most recognizable is Terry Chandler, the figure who made Fred’s a household name to many in and outside of the 107. His parents opened the bacon-and-egg cafe in 1978 and made it a regular coffee klatch retreat. Growing up, Chandler learned to cook while helping at Fred’s kitchen and from a great-uncle, a chuck-wagon cook. When Chandler got out of the Marine Corps, he eventually returned home to help out his folks. In time, he created a sort of counterculture hang, with laid-back servers who were fishing, hunting and surfing in off-hours. The aged griddle seared up delicious burgers, and the fries became legendary, especially when doused with the Sriracha hot sauce that Chandler introduced to patrons when he took over in 2004.

In time, Fred’s evolved from a cash-and-beer-only operation to one accepting credit cards and serving hard liquor. The menu grew as Chandler added Spicy Night specials that might include short ribs in an ancho chile sauce. Using every inch of real estate to expand, a sand volleyball court became a covered bar with a stage for live music. Chandler’s side hustle was a chuck-wagon catering operation that brought a menu overlap to Fred’s, with things like Dutch oven sourdough biscuits and grilled quail with eggs at brunch.

The staff grew, too, including longtimers like Wallace, who attended Arlington Heights High School. “Terry hired me in 1999, starting me in the dish pit,” says Wallace, whose day job was running a headshop called Planet Utopia. “I was there to help Spicy Night grow and to help out on the chuck-wagon events.”

Wallace, who switched to real estate work by day, became the night manager in 2004. By 2008, he came aboard full time, opening Fred’s in north Fort Worth in 2011 — the year he became a partner in the business — and Fred’s TCU in 2013. With three locations and chuck-wagon gigs going strong, they found much-needed help in Fabián Alvarado.

“My first job was making menudo on the chuck wagon, working on a ranch roundup for two days in 2015,” recalls Alvarado, who was recently named head chef at the relocated Fred’s. “Terry picked up right away on how serious I am about food, and we did a lot of cool things, sort of making a play on nouvelle chuck-wagon cuisine.”

A native of Fort Worth’s Northside, Alvarado learned to cook at places like Joy Luck Chinese Restaurant in Grand Prairie: “The owners taught me and trusted me, treating me like their own kid.” Helping out on Fred’s chuck wagon and caterings, Alvarado also boosted his culinary acumen while working at Bearded Lady and Le Cep. During corporate kitchen stints at TCU, Alcon and Facebook, he also learned more about running the business side of a restaurant. 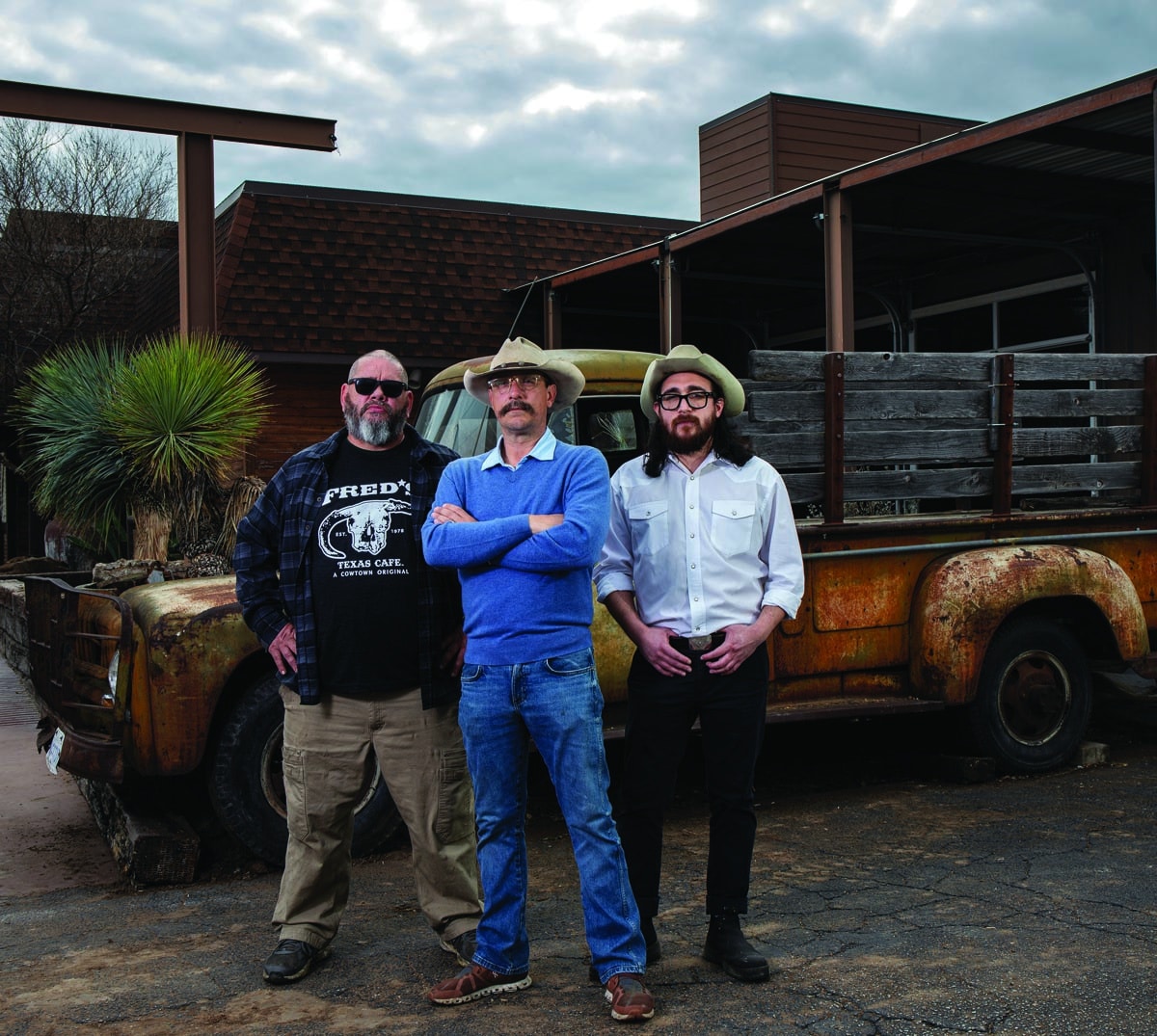 The Fred’s Texas team includes, from left, director of operations Cliff Whaley, co-owner Quincy Wallace and chef Fabián Alvarado. The rusty 1950s International Harvester became part of Fred’s about 10 years ago. In addition to the desert-style landscaping (they moved most of the plants from Currie Street), it’s part of the look Wallace wants to take root at the new location. Photo by Meda Kessler 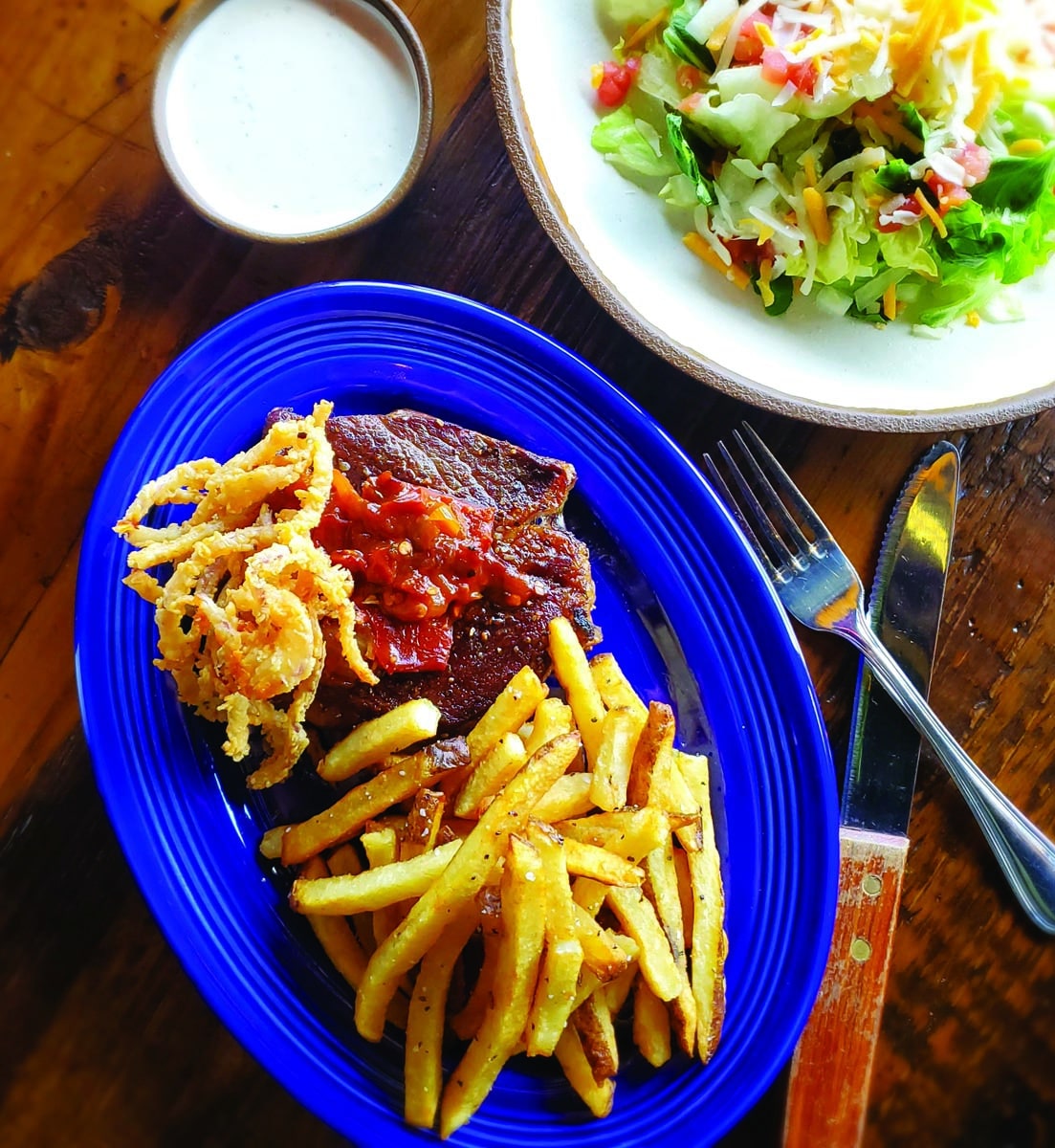 Look for the return of Spicy Night specials such as the rib-eye topped with a chipotle sauce and crispy buttermilk-battered onion strips. Photo by Meda Kessler

The pandemic hit Fred’s hard. Though the north Fort Worth location rebounded in a couple of months, the TCU location closed permanently in 2020. Chandler — having endured a divorce and looking for a change of scenery — began spending time in Costa Rica. By late 2020, he moved there permanently. “I helped him pack up and thought, ‘Man, this is the end of an era,’ ” recalls Wallace of his close friend, who remains co-owner. “But Terry promised he’ll do whatever I need to keep the brand alive.”

At the new location, look for the standard Fred’s menu of burgers — the Diablo, noted for its assertive heat from chipotle chile; and the Outlaw, stuffed with pepper jack and poblano chile, topped with guacamole. Lunch specials include the much-loved fried chicken Wednesdays, while Spicy Night items include Green Dragon Pork, another Chandler signature dish. Chicken-fried steak with eggs, migas, quail with eggs and seriously big biscuits will be on the brunch menu.

In hiring Alvarado away from his gig at Facebook, Wallace — who knows his way around the kitchen but would much rather be in the front of the house — wanted the right guy, a person who gets the Fred’s vibe. “Fabi understands the flavor profile and knows exactly what to do, which is to not change anything, really.”

The understated Alvarado offers a quiet earnestness when talking about the weighty challenge. “I’ll add some creations of my own, but it’s important to honor what Terry did here. Quincy is offering me something special, to open a new Fred’s and get the band back together. I’m extremely humbled to be a part of that.”

Fred’s Texas Cafe Scheduled for a mid-April opening, the new location will serve lunch and dinner daily and brunch on weekends.