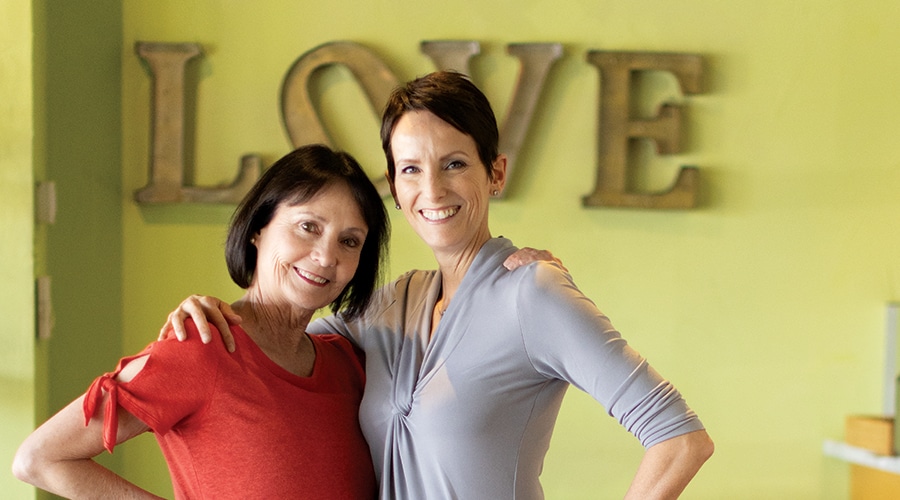 “And to think that at one point I was sure I was going to be a singer. Instead, I find myself being able to discuss grease traps.”

Hillary Biediger, founder of Juice Junkies, looks back on life’s twists and turns with a smile and a shake of her head. But she also proudly wears the badge of a small-business survivor and is leading the organic juice bar she founded in March 2013 to its 10th anniversary this spring. If you ask any restaurant owner, they’ll tell you that this is no small feat. Plus, Hillary has no intention of sitting still (more on that later).

One of the original tenants of the Foch Street warehouse development and an early proponent of organic cold-pressed juices, she also has a store in Keller. Hillary found an audience looking for natural organic products and expanded into food with plant-based options including soups, snacks and sandwiches. (Everything is made in the Foch Street kitchen.) 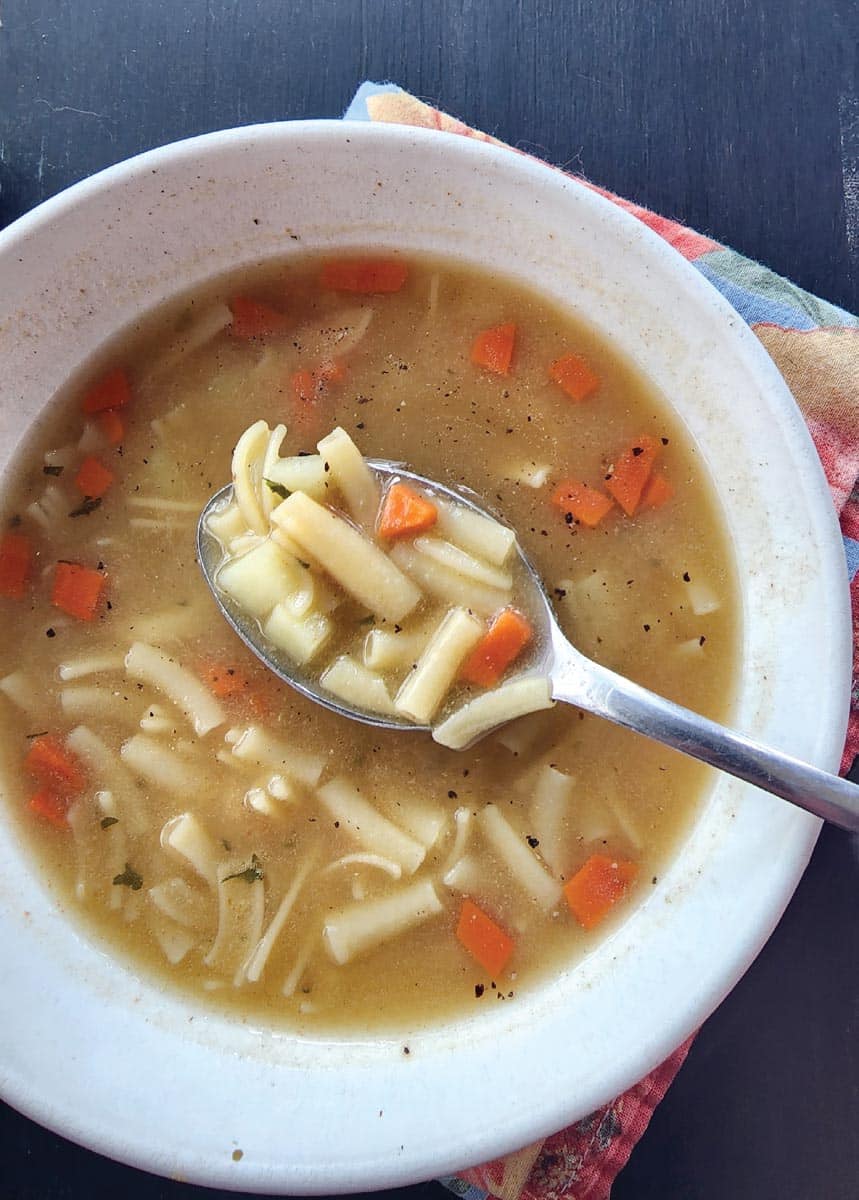 The chicken noodle soup is rich and satisfying (we added carrots). 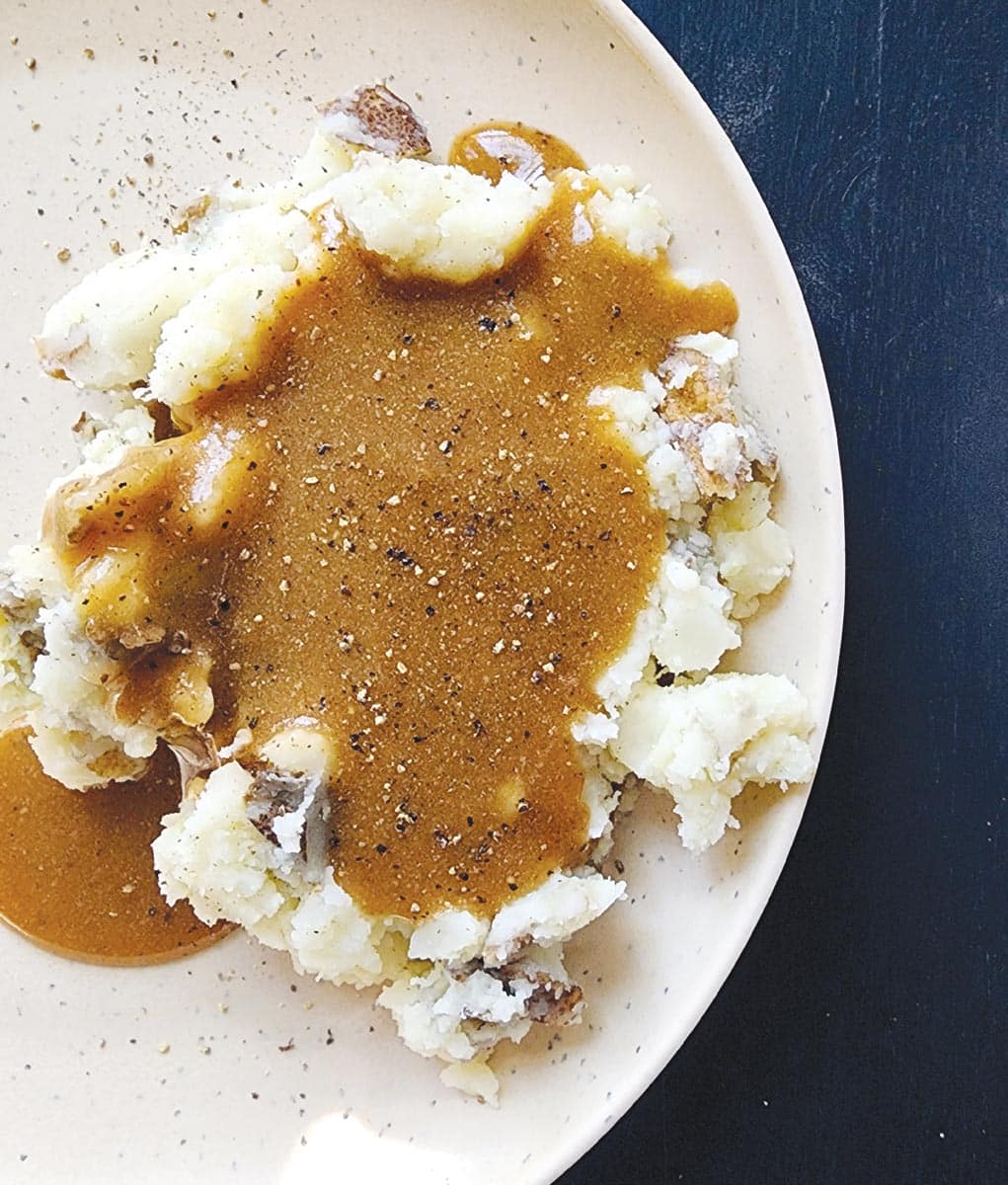 The brown gravy was the big surprise in our testing. It’s thick and flavorful; we spiked ours with lots of black pepper because we like our mashed potatoes that way.

Along the way, Hillary hired her older sister, Gretchen Biediger Hines, as her first full-time employee. The women, who also live in the 107, had been on different career paths. Hillary wanted to be a singer, and in 1996, moved to New York City to pursue her dreams; she ended up moving back to Fort Worth in 2006 and working in the restaurant business. Gretchen worked in the marketing department at The Dallas Morning News but grew tired of the daily commute.

Both sisters are big fans of good food. They have family in the cattle business but have opted for a plant-based lifestyle for multiple reasons. They readily admit that you have to find the right mix of ingredients to achieve the proper flavor and texture with such foods.

Even with the neighborhood’s changeover to mostly bars and clubs, Juice Junkies draws a wide range of customers popping in all day for a smoothie or other healthy beverage. “We’re open when the bars aren’t,” says Gretchen. To deal with iffy parking, they also deliver curbside.

In 2019, they launched Beedigger’s — a play on their last name — a line of vegan, dairy-free and gluten-free products that includes a cheese sauce and salad dressings.

But the last few years, major life changes — beyond the pandemic — have been challenging for both sisters.

Their mother, Judith Biediger, died in December 2021. Hillary had grown exceptionally close to her mom after moving in with her. “When I came back from New York, it was going to be a temporary thing. We ended up being roommates for more than 15 years.”

In March 2022, the sisters decided to rebrand and refocus their food products to include kitchen staples. Gretchen came up with the name Pure Vegan Pantry to instantly tell people what they were about and emphasize their use of simple, honest ingredients. The mixes require the addition of just a few ingredients, such as water, nondairy milk or your favorite vegetable oil. 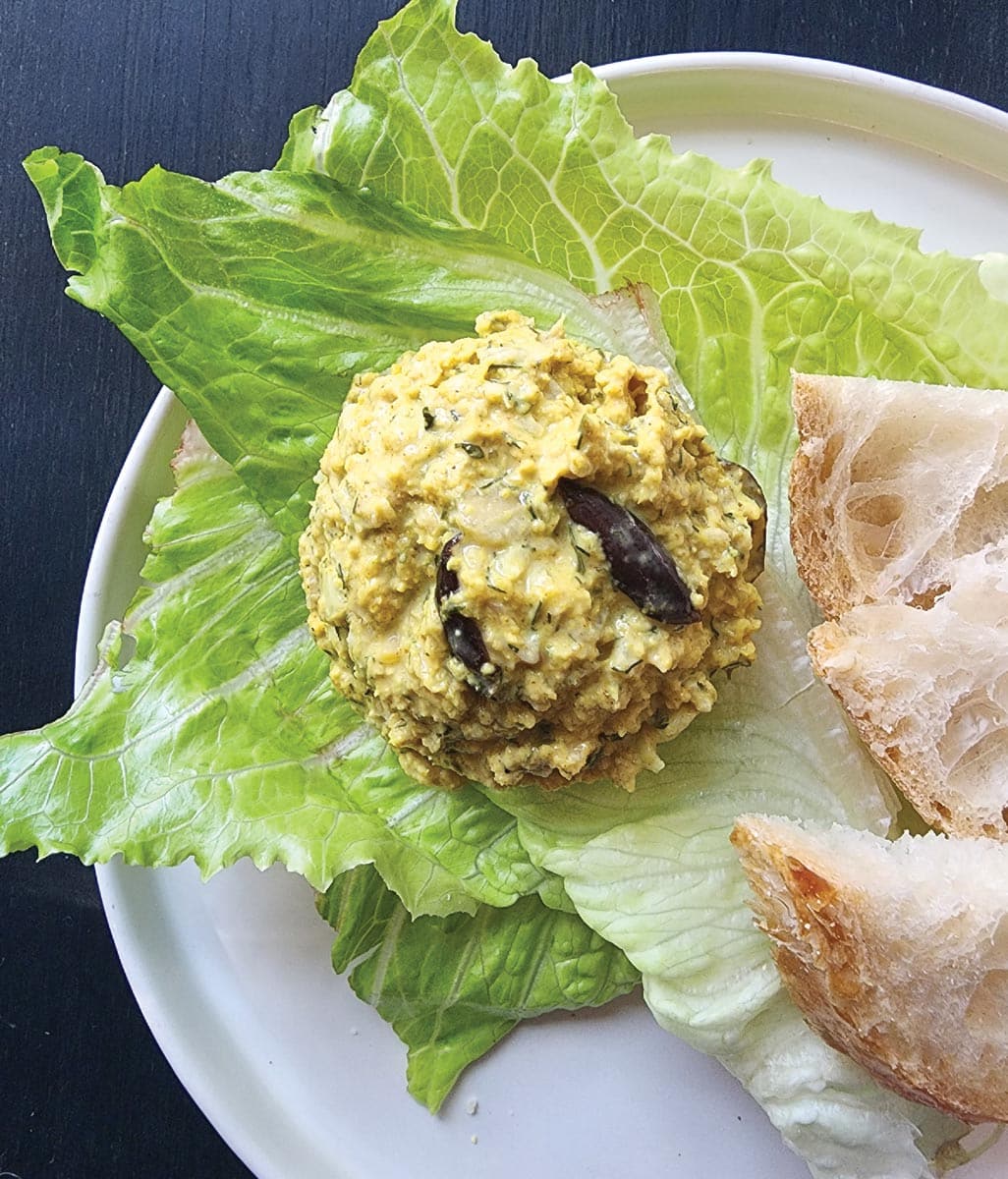 The chicken salad made with pea protein can pass for the real thing and only lacks the chunkiness of poultry. Pictured is the curry version with sweet grapes and spices. 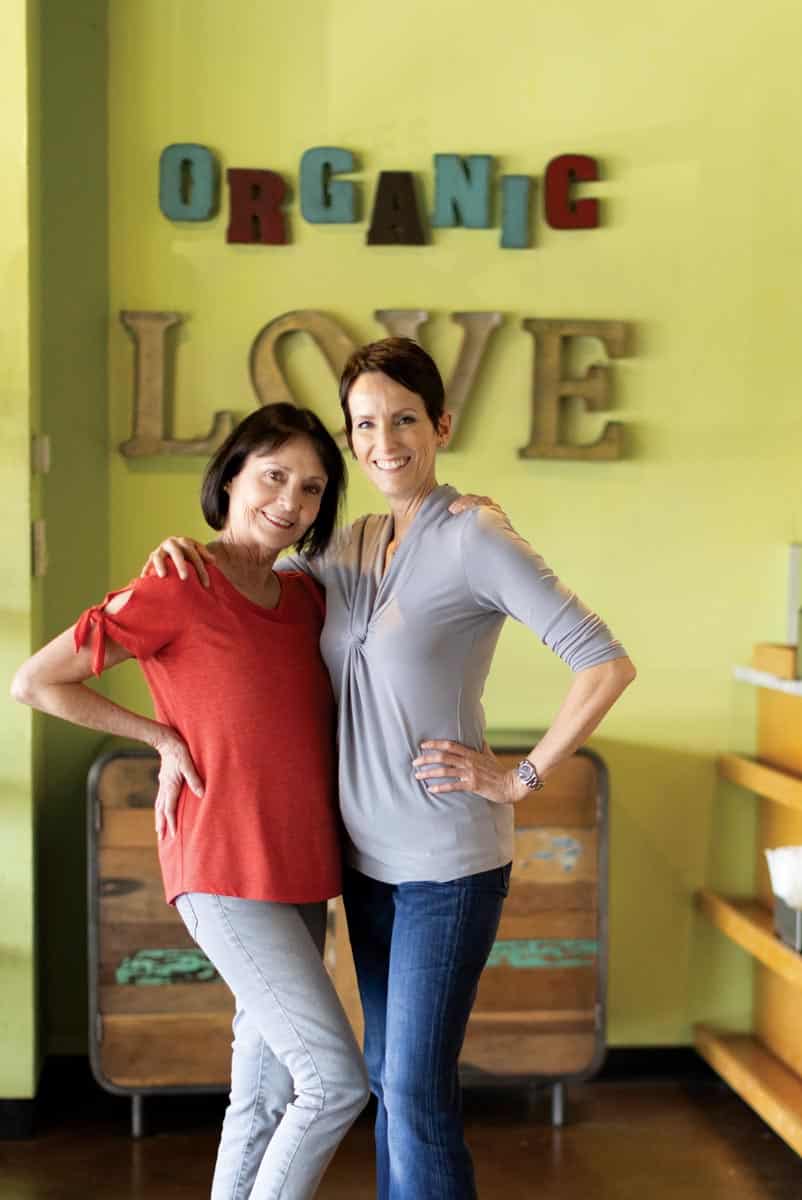 Gretchen Biediger Hines and Hillary Biediger are a sister act to be reckoned with. Photo by Ron Jenkins

Hillary worked nonstop on dialing in the flavors; packaging and other details also needed their attention. Then another family tragedy happened. Their brother, Patrick, died in May at the age 55. They interred his ashes in July along with their father’s, also a military veteran, at the Dallas-Fort Worth National Cemetery.

“It was a crazy time as we were so busy,” says Hillary. She and Gretchen were doing more at the store, too, due to a labor shortage. But they already had booked airline tickets and a booth at the Plant Based World Expo food show in New York City for September. They wanted to launch their new 11-product line, which includes “crumble” mixes for chicken salad, including a curry version; a “beefy” crumble mix they use to make sloppy Joes; soup mixes; and more. They also had to finalize packaging and design websites for wholesale and retail, which includes more than 40 recipes. The goal: To make contacts and to get their products in front of as many people and companies as possible.

They shipped boxes and boxes of products to a friend who lived near the Javits Center, the location of the show, and dealt with myriad union rules to get their booth set up for the three-day event. All the while, the tab of expenses incurred continued to increase.

“It was the last day of the show, and we were so tired,” says Gretchen. “A woman stopped by our booth, and I was trying to see what her nametag said. I realized she was with Campbell’s Soup.”

Hillary says that the woman told them she was interested in dry soup mixes and tried a sample of their chicken soup. “She couldn’t believe there wasn’t chicken in it and seemed to be impressed. While we haven’t heard from Campbell’s, it made us feel good.”

They also picked up their first wholesale account and got a lot of positive feedback. “We made contacts that would not have been possible without going to the show,” says Hillary.

At Juice Junkies, you can buy mix packets along with to-go containers of chicken salad and premade sandwiches. Eating meatless has never been easier. 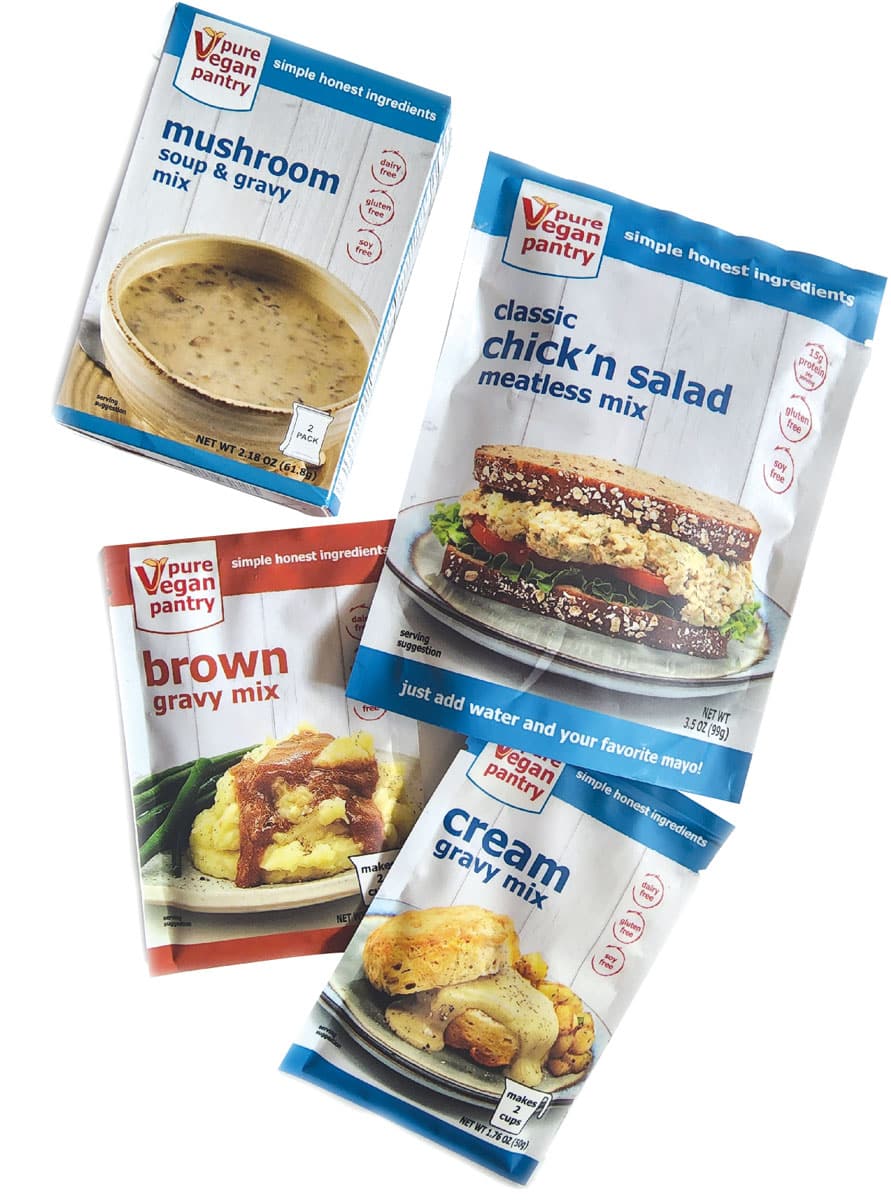 A sample of some of the Pure Vegan Pantry items