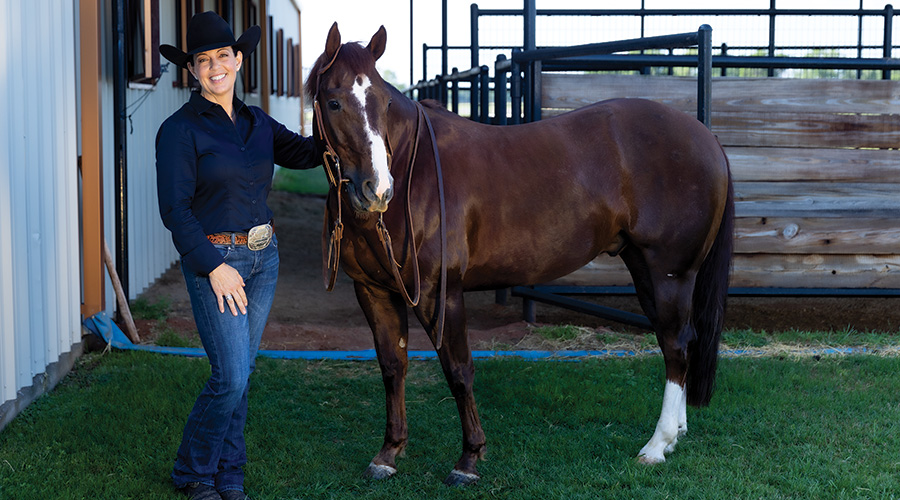 We could talk about Marcelle LeBlanc’s career as a business entrepreneur. The founder and CEO of Velvet Box is building a new location of her retail chain, the sixth overall, in Flower Mound (the 107 VB opened 11 years ago on Morton Street). 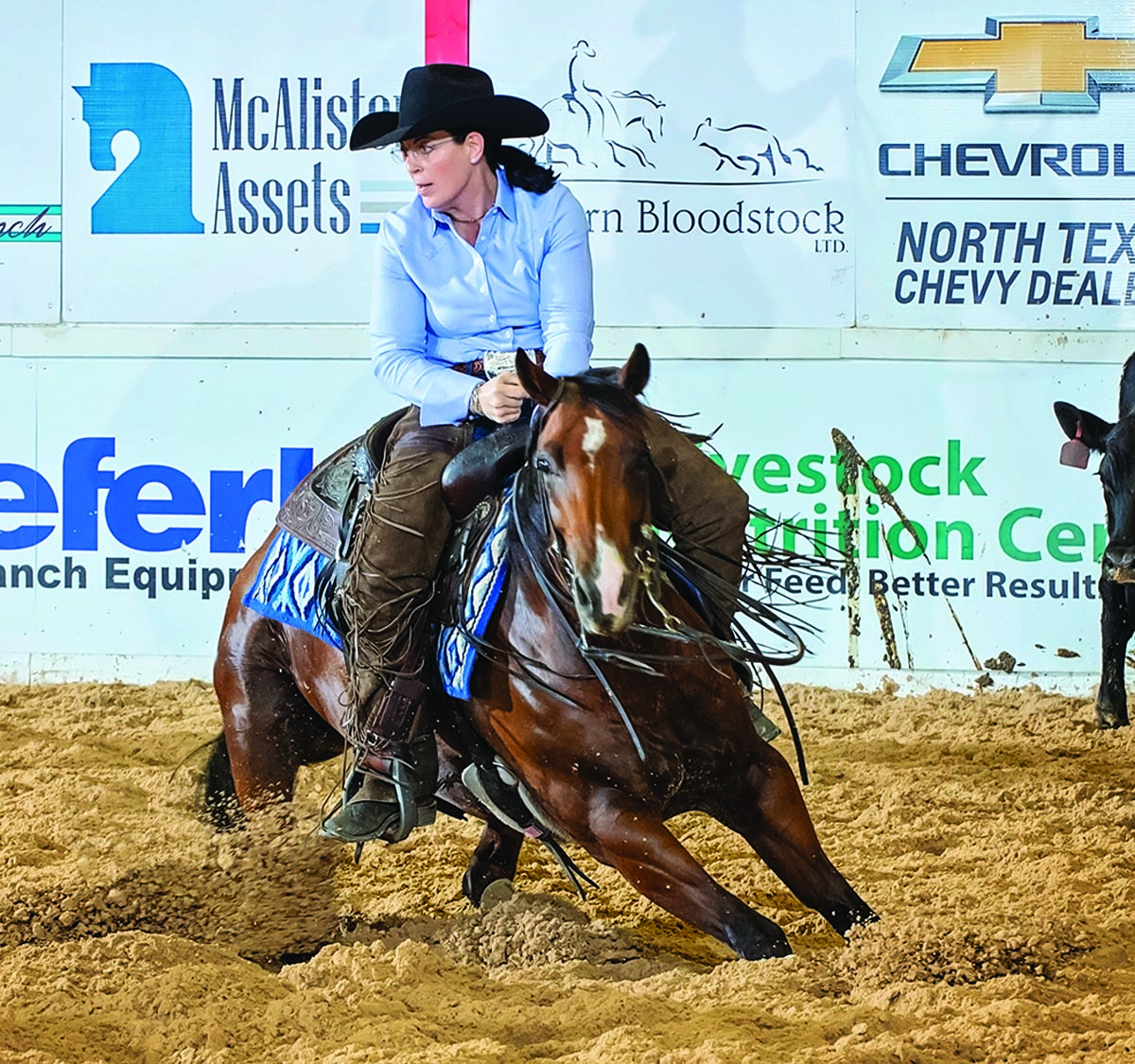 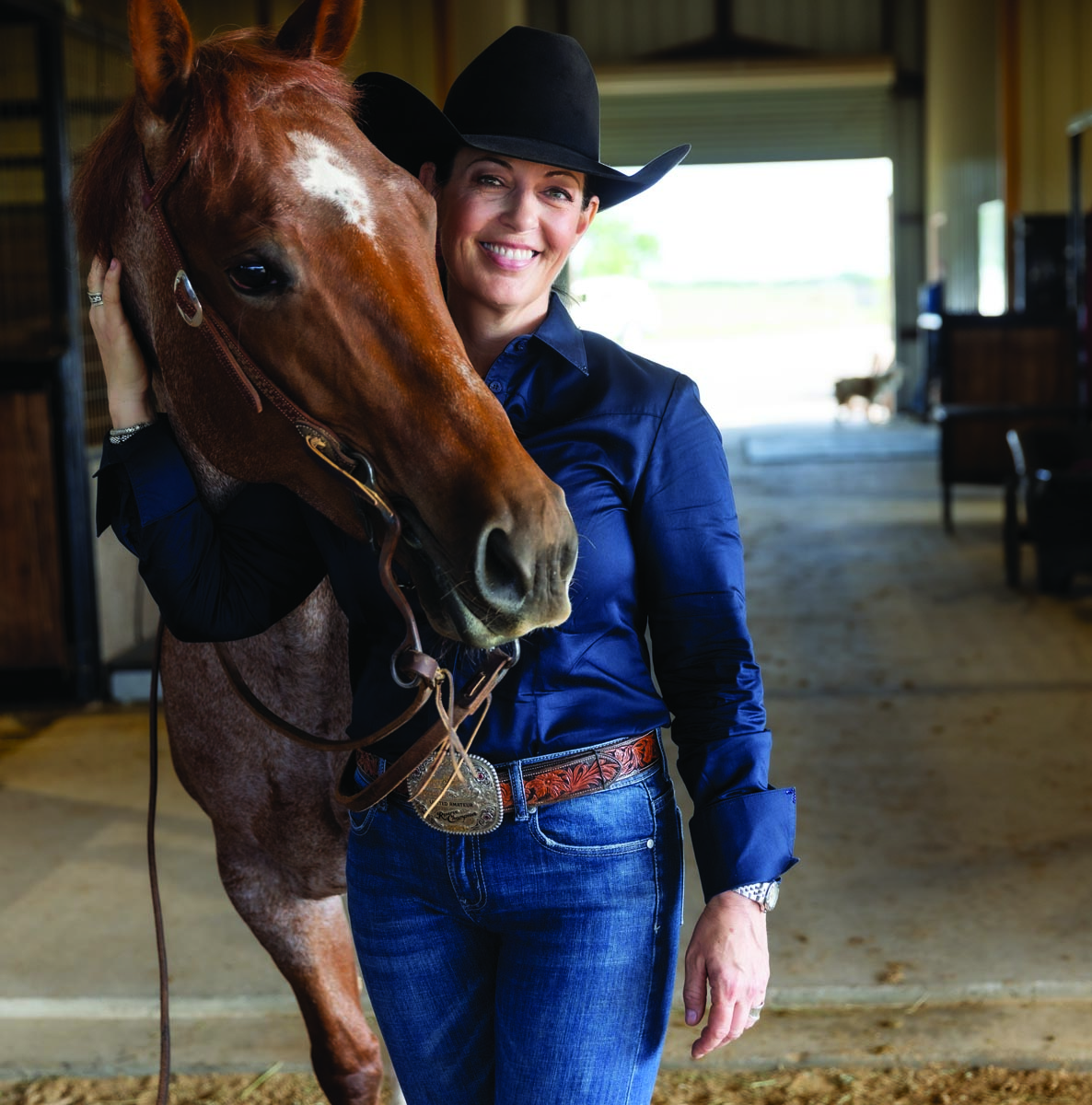 The upscale adult boutique specializes in items designed to enhance sexual pleasure, including lingerie, adult toys and oils, and it offers classes, in-store and online, about health and wellness. One of LeBlanc’s priorities is to create a safe and welcoming environment for
VB shoppers.

She won the Entrepreneur of Excellence award from Fort Worth Inc.in 2021 and was honored in April as one of 23 “Great Women of Texas” by the Fort Worth Business Press.

LeBlanc also is president of the Fort Worth chapter of Entrepreneurs’ Organization, a group she says provided her with the tools to change her life as a business owner.

We could focus on her love of gardening and the stunning backyard she has created at her home in the West Byers neighborhood. She got a degree in ornamental horticulture and greenhouse production at Cal Poly in San Luis Obispo but opted for a different direction post-college. Years ago, we’d run into LeBlanc at Archie’s Gardenland almost every weekend.

Recently, we caught up with LeBlanc between her construction site visits and business trips to learn more about the demanding amateur career she has built in the world of cutting horses and cattle. If you’ve never watched cutting, think of it as a faceoff, one where the horse and rider harmonize on movement and response to separate a cow from a herd, move it to the center of the arena and hold it there to keep it from returning to the herd. There are no ropes involved — just a lot of concentration and almost imperceptible communication between steed and human. 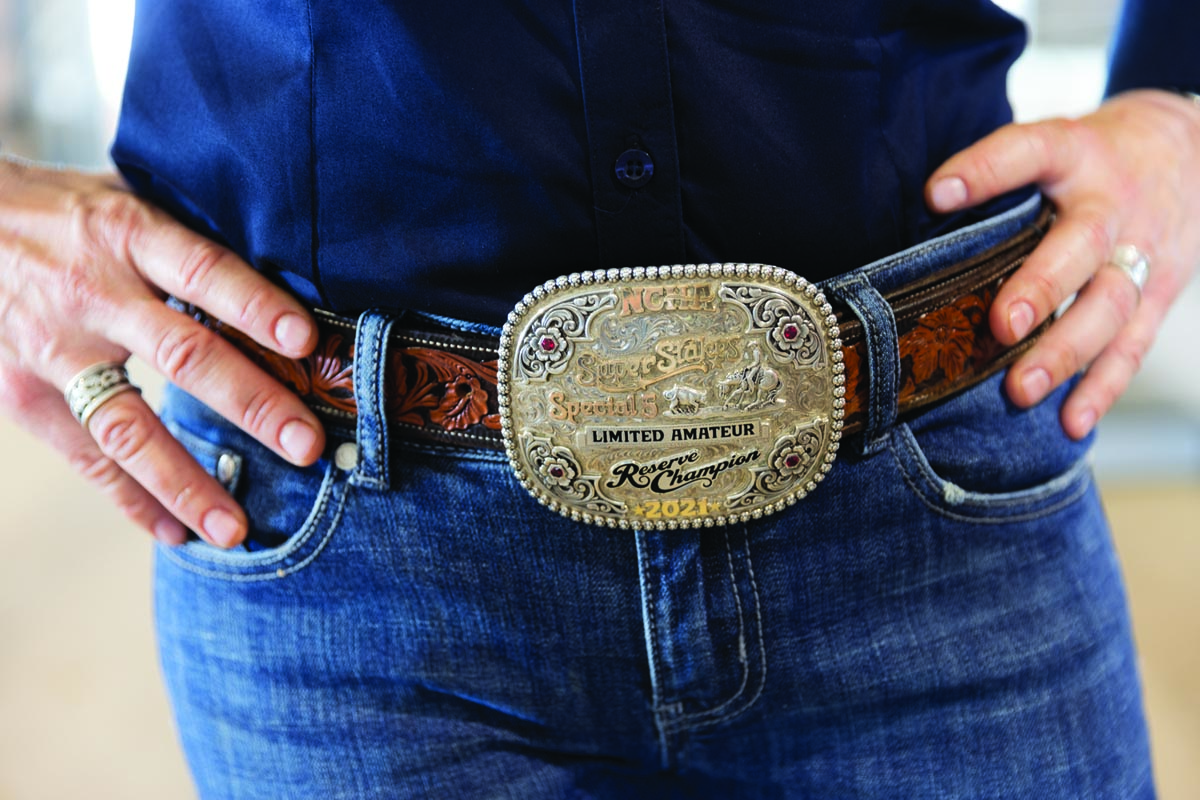 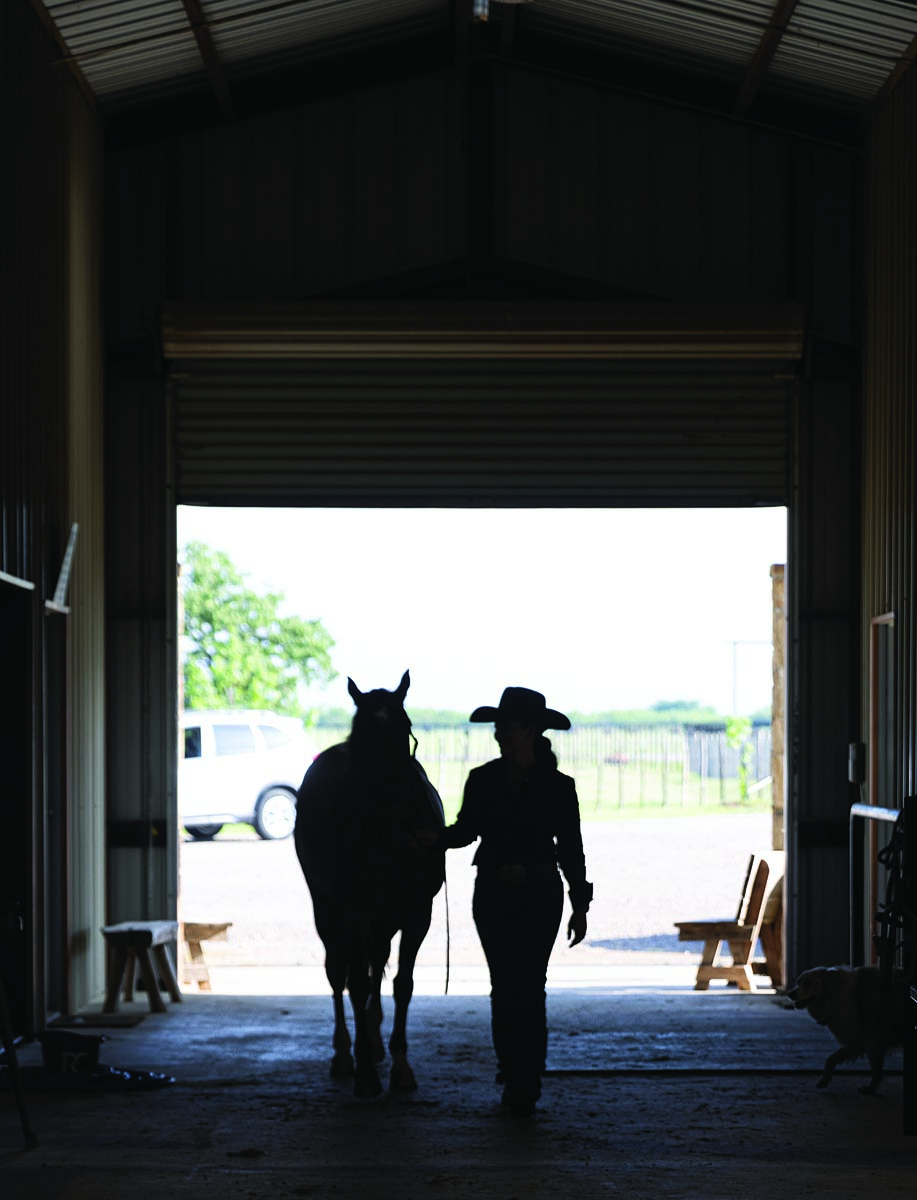 “We always had horses. I got my first Welsh pony when I was about 7,” says LeBlanc. But she always had aspirations to be a cutter, she says, and credits this dream for turning her life around when she moved to Fort Worth.

“In 2007, I was offered a job that gave me the option to choose where I could live. One of those places was Fort Worth, which was close to Weatherford, the cutting horse capital.”

The National Cutting Horse Association also holds its Triple Crown of Cutting, including the World Championship Futurity, in Fort Worth each year, another plus for LeBlanc.

“I was so impressed by the amazing athletes, the horses and riders. In 2008, I sat in the stands at the Futurity on what I consider to be one of the darkest days of my life. I had left California after getting tangled up in the mortgage crisis and losing everything I had for the second time. I had only $300 to my name, and thought, ‘I will never be able to be one of those people down there competing.’

But LeBlanc’s business success has allowed her the time and opportunity to become “one of those people.”

She says much of the credit goes to professional cutter and trainer Randy Chartier, her mentor, and his family. Chartier runs a ranch and cutting horse facility in Millsap, LeBlanc’s home away from home. While he works mainly with professional riders, he keeps a few spots open for amateurs such as LeBlanc, who turns 50 this fall.

“One of Randy’s strengths is to match people with the perfect horse,” says LeBlanc. “I’ve kidded him and told him I wish he could do the same for me in my dating life.”

She is now the proud owner of 5-year-old Rambo (Sueper Hot is his official name) and 8-year-old Patti (Twiced Bet), along with a wardrobe of sleek riding shirts with the tiniest touch of bling, jeans, boots and a couple of hand-engraved prize belt buckles.

But LeBlanc is quick to mention that cutting is a team sport. “One round requires at least three hours of preparation by me and five others to get ready for 2½ minutes in the ring.” 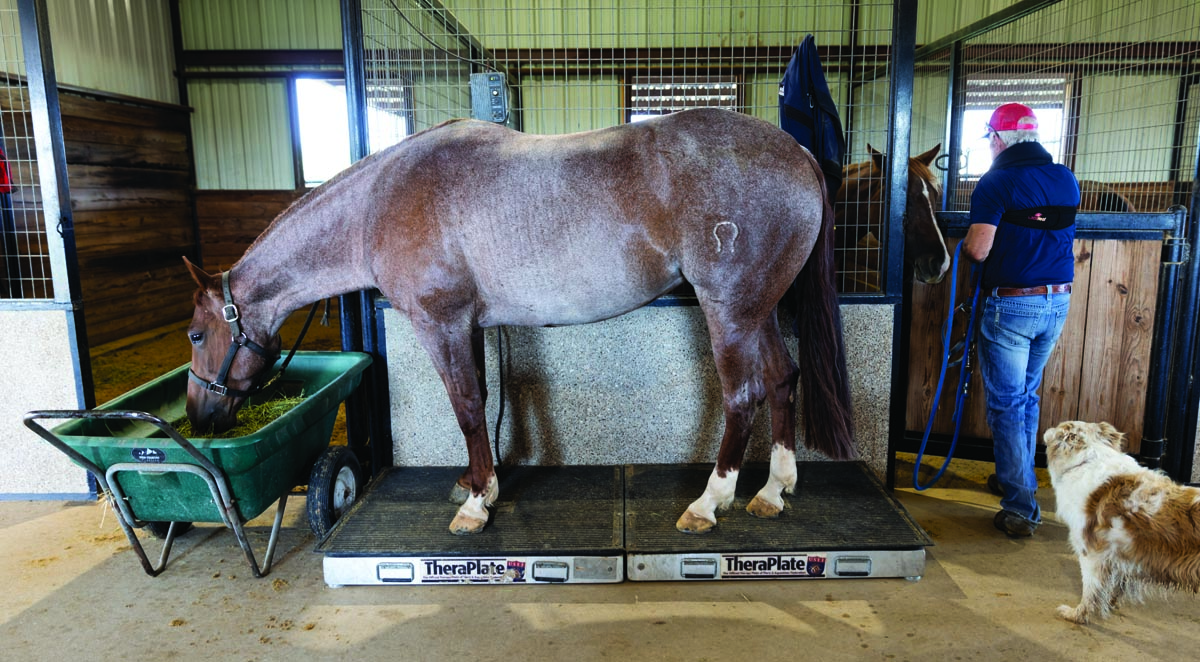 Patti eats while getting a special foot treatment from the vibrating plates she is standing on. 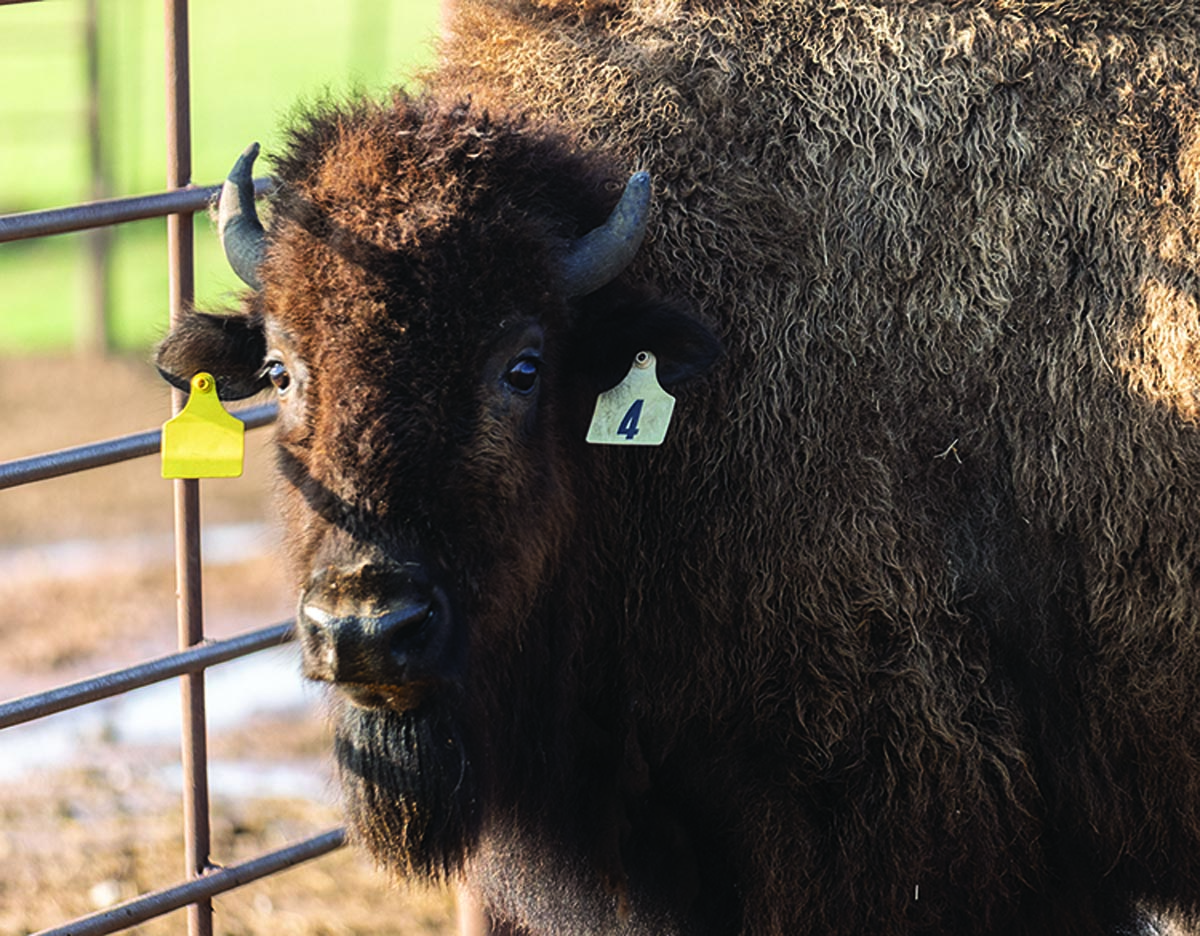 Buffalo are sometimes used instead of cows for training purposes.

She has to know every one of her cows and watch her competitors’ runs in order to give herself every advantage in the show pen; she and her team pick out the three or four cows they think will work the best. Judges give style points, too, so she has to be aware of her body position and hands. She wears glasses when she cuts so she can see the cow better. LeBlanc admits that in the early days, it all was a blur and that she made mistakes, including cutting etiquette no-nos, because she hadn’t been taught the correct way.

Physically, the stop-and-turn motions generate the power and adrenaline rush of a car wreck. To stay in shape, LeBlanc does Pilates. The horses get the best of care at the Chartier ranch: rest time, acupuncture and time with the dentist and farrier when needed.

LeBlanc takes bags of organic carrots as treats for the horses on her visits to the ranch. It’s a small expense compared to the cost of training, staff, entry fees, travel costs and, of course, the cost of a good horse. LeBlanc’s tab includes a fancy espresso machine and milk frother for road trips. “A good cup of coffee first thing in the morning makes a huge difference. Everyone now expects cappuccinos.”

Her earnings over the last five years total $63,474.84; she has bigger aspirations for the next two years including winning one of the Triple Crown events at Will Rogers. In 2021, she was in the Top 15 in the 50 Amateur division of the World Finals. She also was the 2021 Reserve Champion in the Limited Amateur division of the Super Stakes. 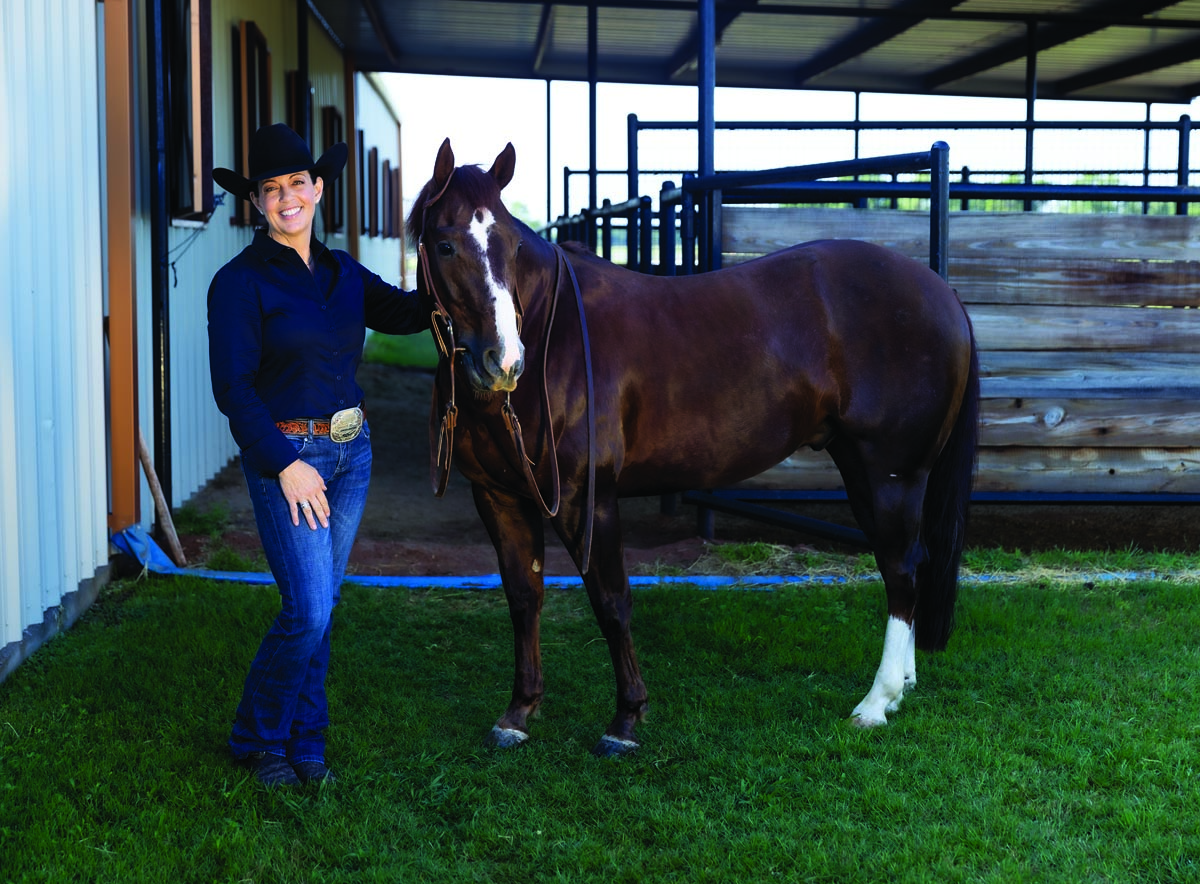 LeBlanc with Rambo, a horse she bought this year on the advice of her trainer, who also rides Rambo competitively. 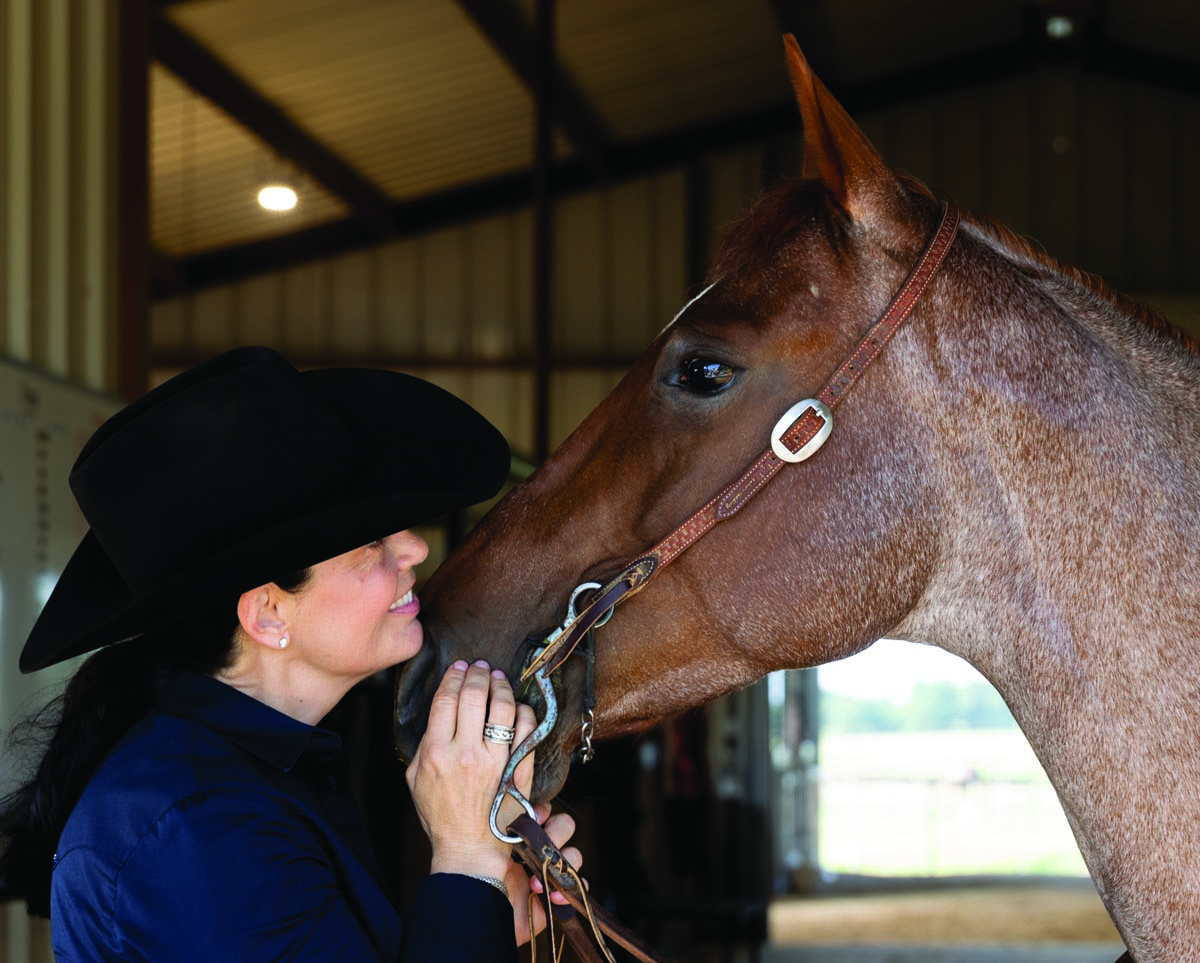 LeBlanc gives Patti some special attention after their photo sessions.

She’s proud of what she has already accomplished. “I went from having a good horse to two really good ones. And with Randy’s mentoring and guidance, I made the World Finals in 2021. In 2022, I acquired Rambo. To be able to afford this caliber of athlete and have gained the skills to show him competitively is one of my greatest achievements in life. These horses taught me so much. I’ve learned to be patient, confident and gritty all at the same time.”