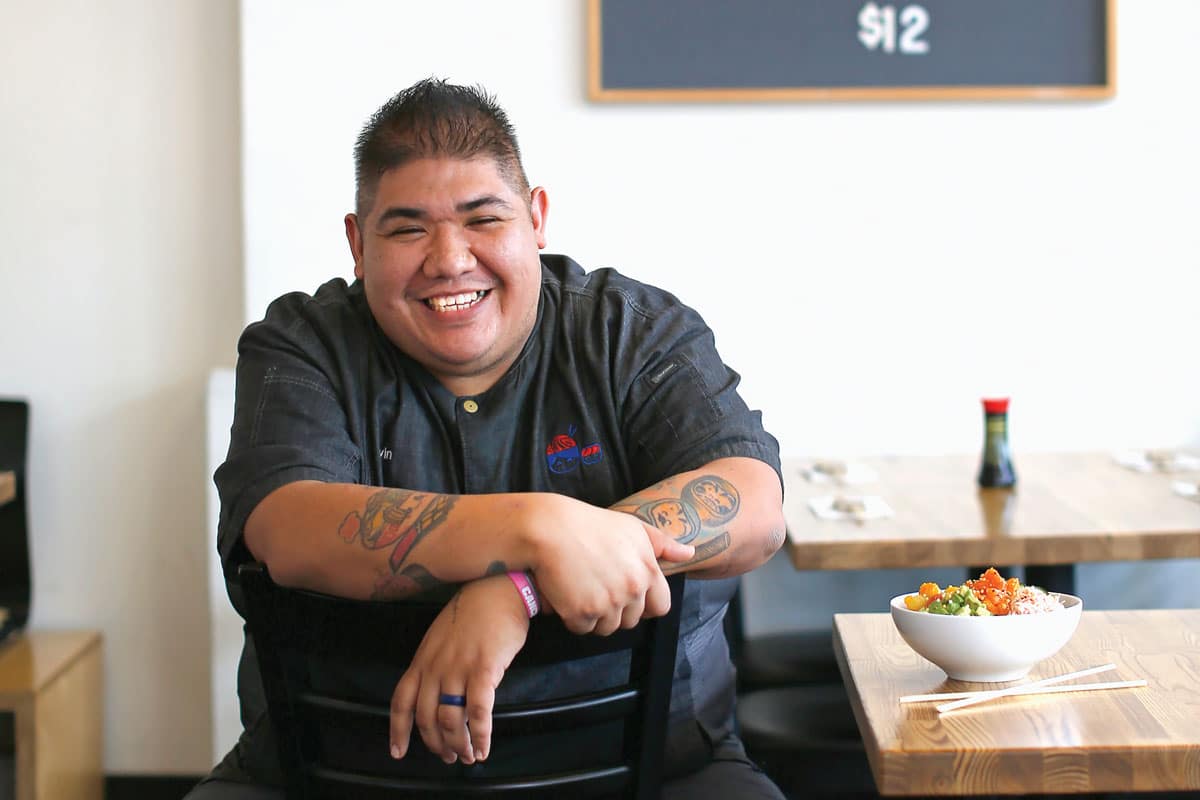 From Tokyo Cafe to Tokyo, Japan, Chef Kevin Martinez does his best to have fun and make good food.

It’s Sunday, typically a closed day for Tokyo Cafe. But there’s a big steel smoker in the parking lot, which is filling up fast for a special pop-up dinner. A “Private Event” sign on the front door is there to ward off restaurant customers. Inside, chef Kevin Martinez plucks a sample of smoked beef cheek off a big sheet pan with a gloved hand. He smiles and says, “This is going to be fun.”

It’s a three-letter word Kevin uses a lot. The 33-year-old still manages to find the happy side to a business where 18-hour days are the norm. His sunny attitude and his work ethic have made him popular for the 10 years he has been at Tokyo and with fellow chefs who have leaned on him for support, advice and help. 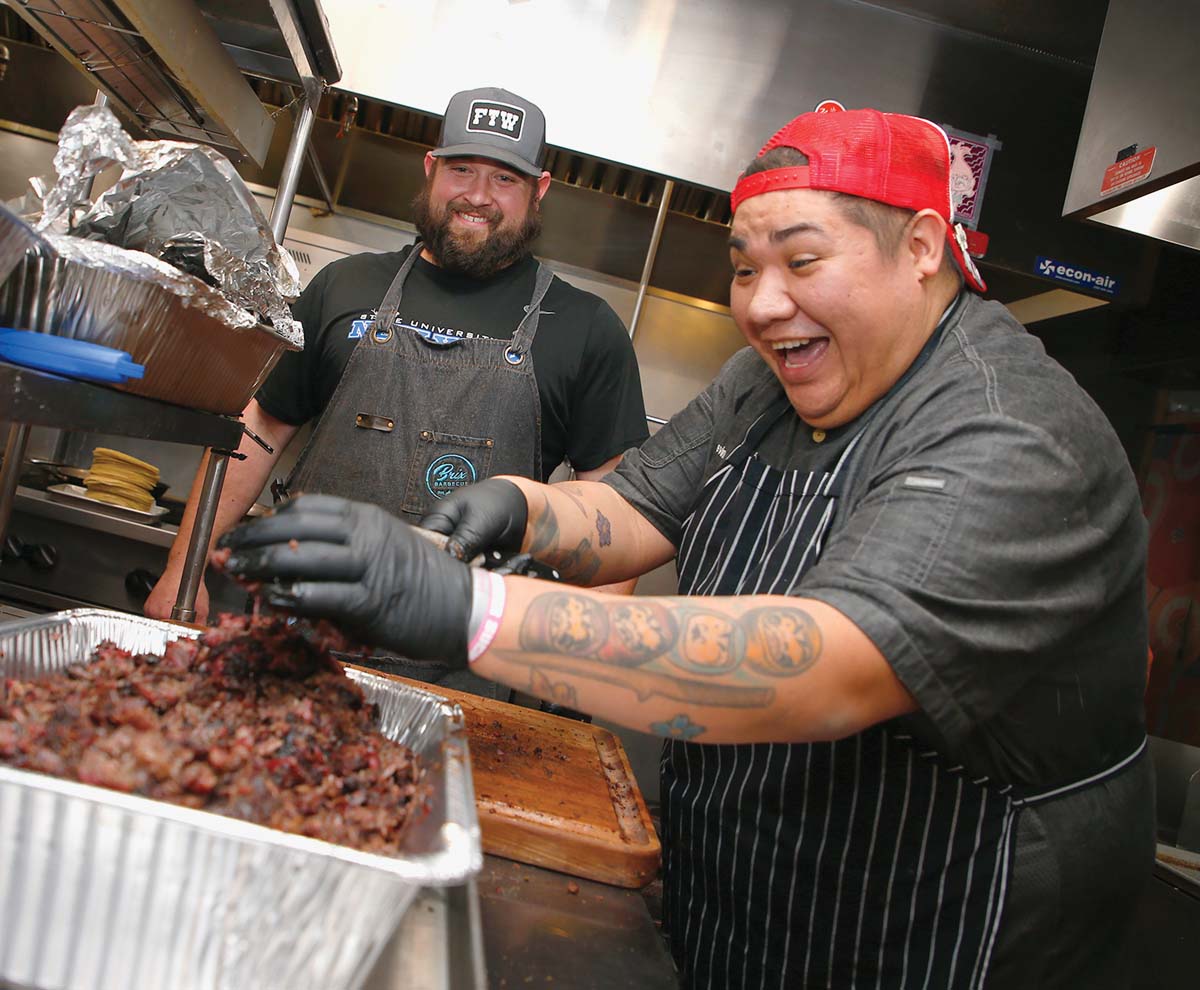 Trevor Sales of Brix Barbecue and Kevin prep their East-meets-West menu for a Sunday pop-up at Tokyo Cafe. Sales made a kimchi slaw and Kevin made the potato salad to accompany the slow-smoked beef cheek and duck fat tortillas, beans, chicken wings and pickled vegetables. 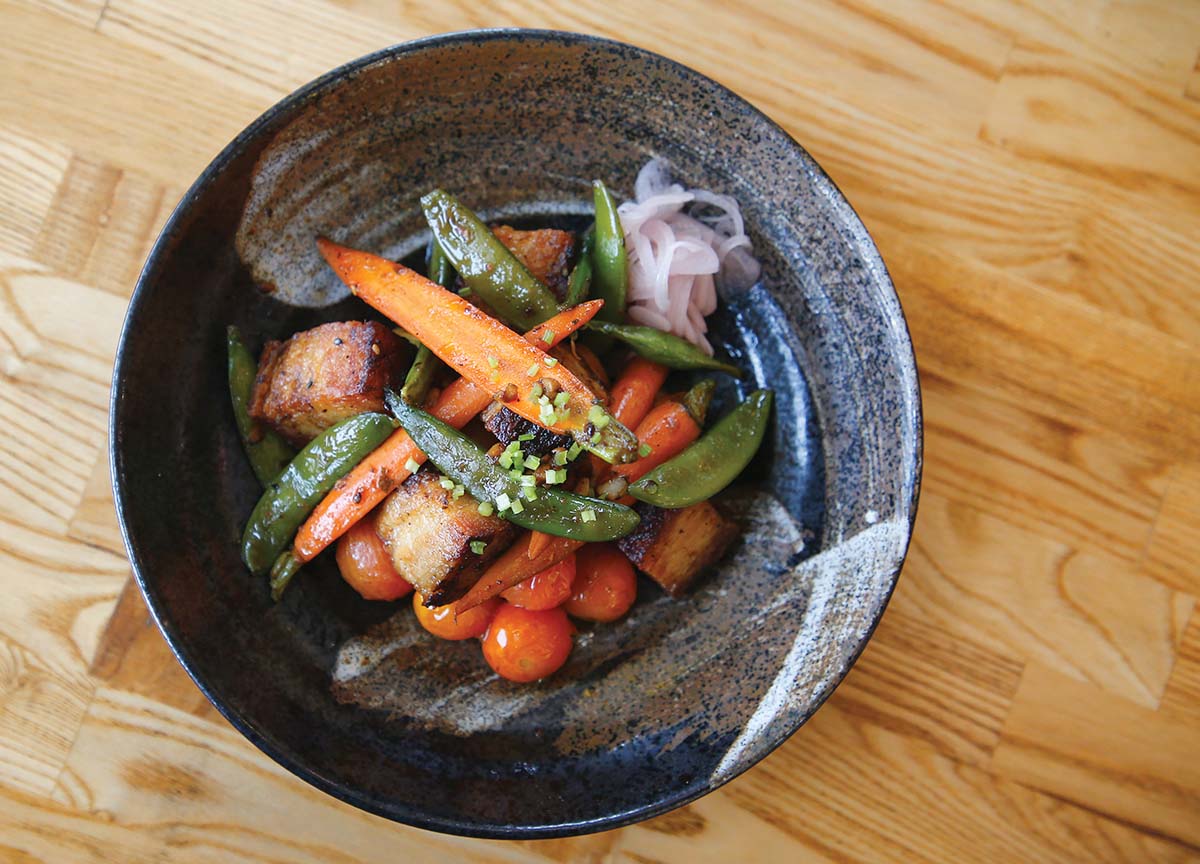 Kevin was born in Denton, but his food roots run south to Mexico, where his grandmother made tortillas and topped them with grilled onions, avocado and a tomatillo salsa (this would be his last-meal request, by the way). Early in his career, he sharpened his knives and honed his cooking skills locally in the hospitality industry. He was working at the now closed Cafe Nutt in Granbury when he spotted a Craigslist posting for a chef job at Tokyo Cafe.

Jarry Ho, who owns Tokyo along with his wife, Mary, had listed the job. “We were losing our head chef and, honestly, didn’t have many candidates. Kevin’s strength at that time was American food with an occasional Asian twist. I told him we wanted Asian food with an American twist.”

He was hired and encouraged to read books, explore Asian cooking and immerse himself in the culture. He joined the Fort Worth Japanese Society to learn more about traditional dishes. “There was a lot of trial and error in the beginning,” Kevin admits. “You learn a lot about yourself when you’re in charge of the kitchen.”

In June 2014, everything changed when extensive damage from a kitchen fire closed the restaurant. Months went by as the Hos were busy opening Cannon Chinese Kitchen along with dealing with post-fire issues at Tokyo. They kept Kevin on the payroll as long as possible before funds became scarce.

“I really thought about moving,” Kevin says. “Tokyo was the only place I wanted to work.” And then he spotted a faded treasure in a River Oaks salvage yard. “It was a lemonade stand, but I saw immediately what it could become.” Yatai Food Kart was born. His original plan was to name it “Skew,” as he planned to offer only grilled skewers of meat and vegetables. But Yatai morphed into a mobile street-food cart. “Running a food truck humbles you pretty quickly,” says Kevin, who remembers getting to the Velvet Box parking lot around 11:30 p.m. for his first service of ramen and a rice bowl. “Thank goodness for the service industry. I texted all my restaurant-worker friends to come and eat.”

To pay for Yatai food and maintenance, he helped out in local kitchens — more than 30 by his count — on an as-needed basis. There were good days and bad, with happy customers willing to wait in line along with blown tires and mechanical difficulties. Jarry supported Kevin and his mobile experiment. “I was excited for him. Kevin has an active mind, and it was good for him to stay busy.”

Jarry also knew he didn’t want to reopen Tokyo without Kevin. “We have different personalities,” he says with a knowing smile. “He’s outgoing; I’m reserved. But we have similar values, especially when it comes to the restaurant. It’s about how we treat people, how we manage our staff.”

Tokyo Cafe reopened in October 2016. They got an unexpected welcome from old customers — and new ones. “We were slammed for what felt like a year and a half,” says Kevin. “Yatai sat parked, because it was all about the restaurant.” 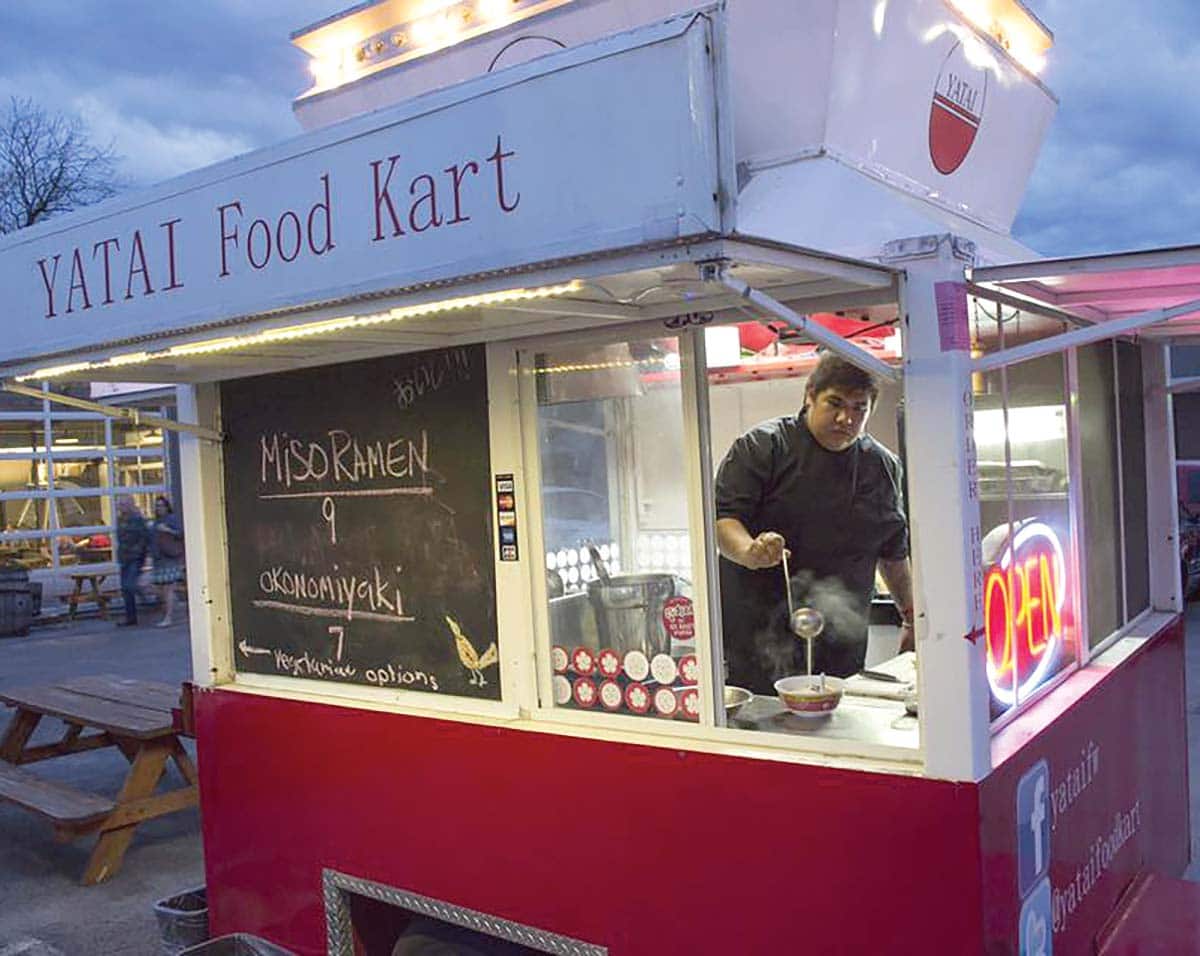 It’s cozy inside the Yatai Food Kart. With limited space, he also serves a limited menu, including a bento box, below. 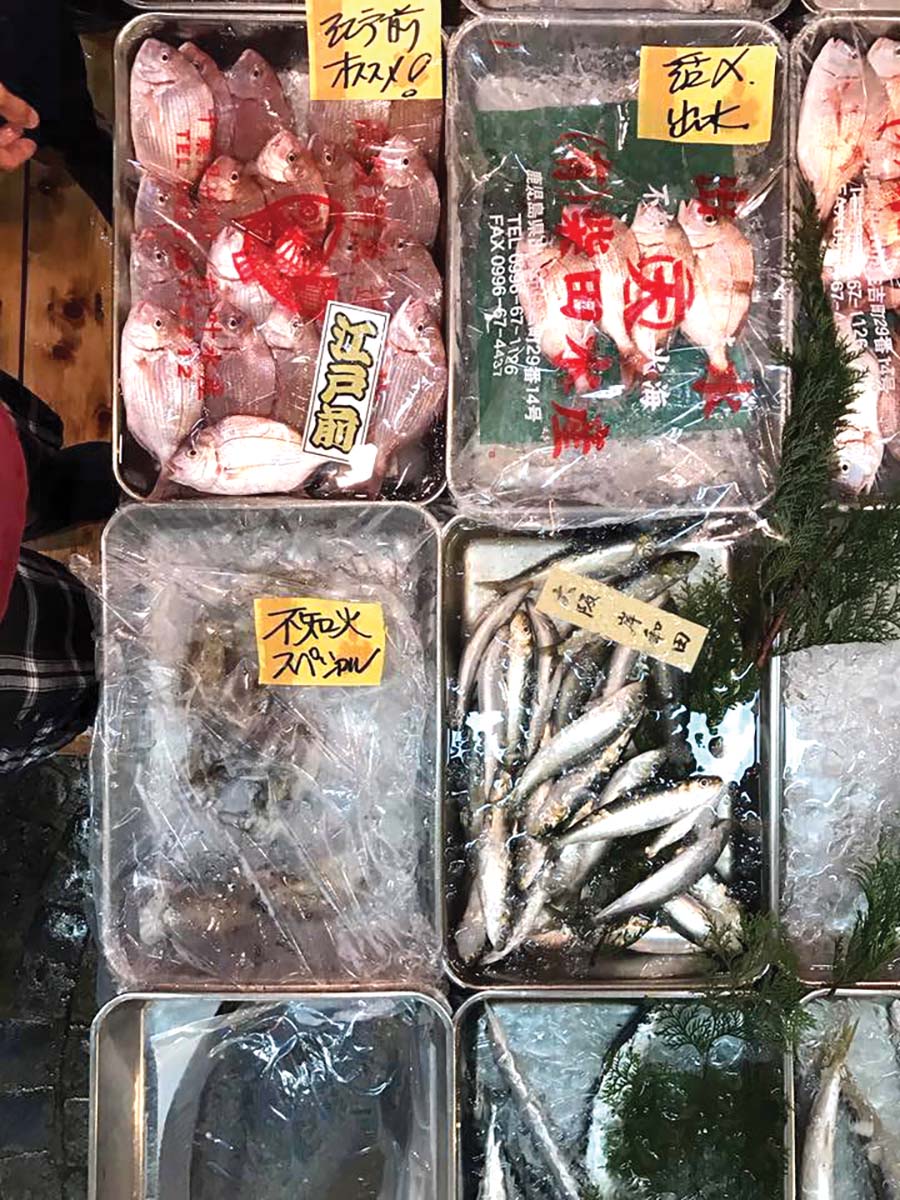 Kevin made time for a trip to a fish market in Tokyo to check out the goods.
Photos courtesy of Kevin Martinez

But the food cart had become sort of a test kitchen, and Kevin introduced some new dishes with Jarry’s blessing. The Tokyokonomiyaki, a savory pancake topped with bonito flakes, and the tempura Brussels sprouts served with white soy are both Yatai experiments.

“Kevin will show me a new dish knowing that I’ll ask if the dish can be made with consistency and if it involves a new ingredient, if that item can be used in another dish,” says Jarry. It’s why pork belly can be found in several menu offerings.

“I now have a smoker at Tokyo, so that’s given me some new options to cook the same ingredient in different ways,” says Kevin. “It’s exciting to make some dishes that have more an Asian bistro feel.”

Last year saw more changes as Kevin worked to slow down his restaurant schedule to spend time with his wife and two sons and to take care of himself. He also had a bit of a health scare that landed him in the hospital. “I’m eating better and have lost 33 pounds.”

Travel has become a priority, as he soon will be headed back to Japan, where his first trip to the city of Tokyo ended with Kevin hosting a pop-up at a small restaurant and quickly making new friends. “You know it’s a good trip when you’re on the street in this huge city and someone yells out ‘Hey, Kevin!’ ” On his list? “Singapore, for the food, of course.”

In the meantime, Yatai has been making a few appearances. “I served 150 at a Rahr event recently; that was nuts.” He continues to pick and choose collaborative pop-up events, including one with Brix Barbecue and a cocktail-driven dinner at The Basement Lounge in the Ridglea neighborhood (“this is something that will force me to grow as a chef”). He and Tokyo Cafe are hosting the second Mac Attack, a March 24 charity macaroni-and-cheese cookoff featuring 18 local chefs. Expect a diverse lineup, from Fred’s Cafe to the Petroleum Club. (Go to Tokyo’s website for ticket availability.)

It’s a testament to the fact that as a chef, Kevin always has played well with others. It’s no surprise to see his colleagues — Fort Worth’s Tim Love, Jason Harper of Trio New American Cuisine in Colleyville or the Classic at Roanoke’s Charles Youts — dining in the restaurant. But it’s the couple whose parents ate there and who now bring their kids who are most important. It’s the regulars who were there the first day of the reopening and those who embrace both the classic beef bowl and a 45-minute wait for dinner.

“I’ve come to understand that no matter what else I do, it comes back to Tokyo Cafe. We are, and always will be, a neighborhood restaurant.” 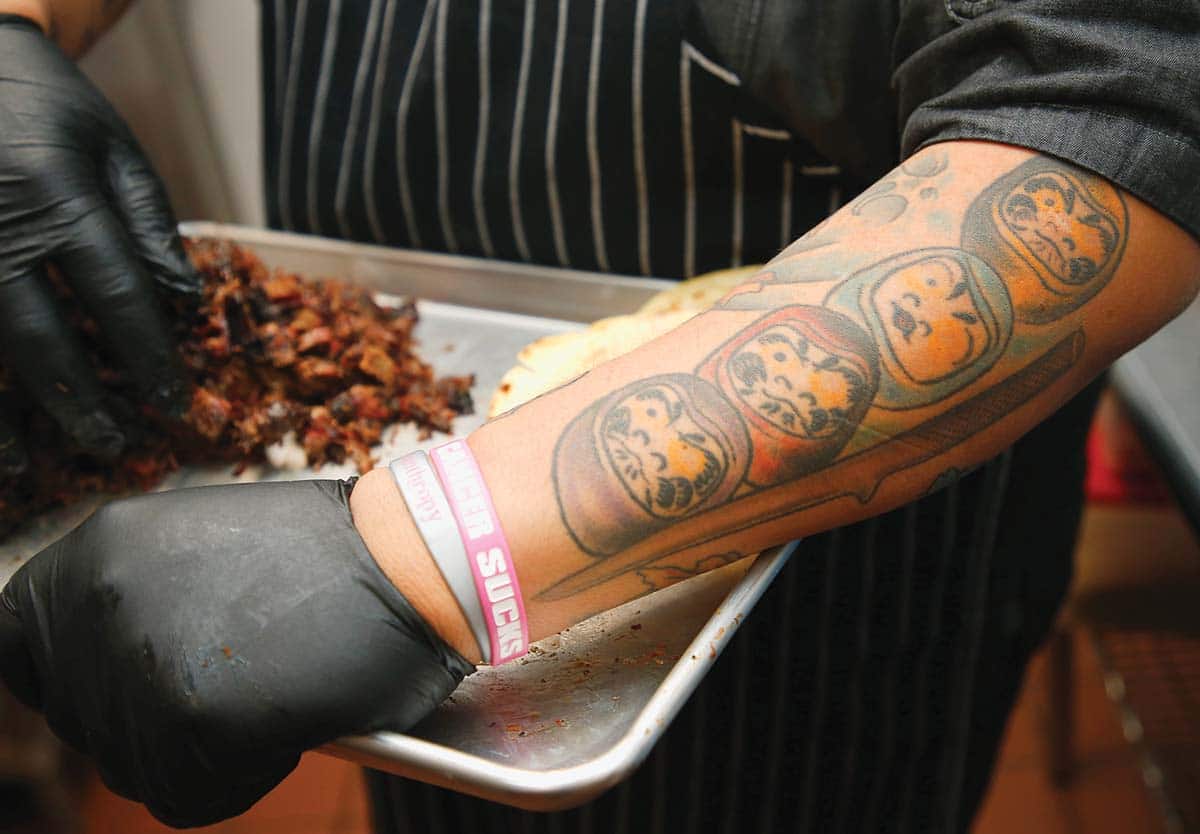 Kevin wears rubber bracelets and pins from charity events he has worked. His nickname, Kmart, started when he was in high school.