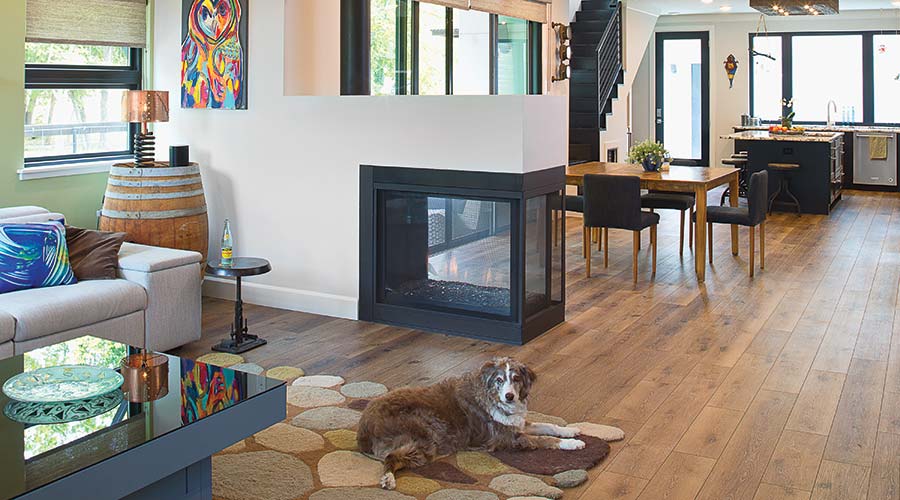 Urban infill. High density. Sustainable construction. These are more than buzzwords for the  “3 Sisters” project. And, yes, it’s stylish, too.

Known as the “3 Sisters” project, this corner development in the heart of a neighborhood filled with traditional homes definitely turns heads.

A single-story quadplex wrapped around a courtyard was scraped after the owners opted to retire from the rental business and the maintenance that comes with the upkeep of an old building. They wanted a trio of energy-efficient modern homes for the replatted lot, including one for themselves.

The couple reached out to Ferrier Custom Homes — long known for its sustainable building practices — located on the same street about a block away, and a partnership was born with owners Don Ferrier and his daughter, Heather Laminack.

When the first of three houses took shape on the 92 feet wide-by-124 feet deep corner lot, its contemporary design stood out in the established neighborhood. The compact scale of the home kept it from dominating nearby houses, but it definitely caught the eye of Jackie and Steve Pierce. 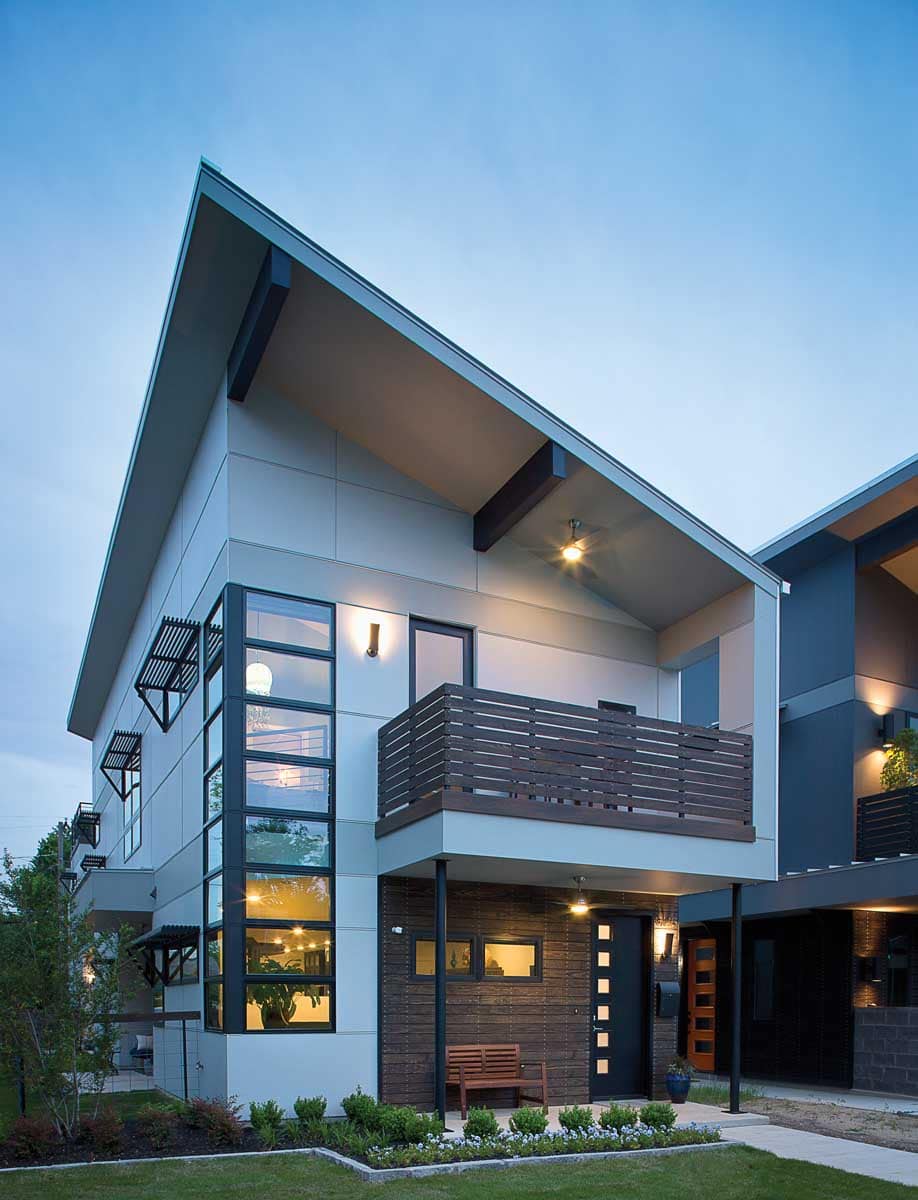 Jackie and Steve Pierce downsized to a customized home featuring four small patios and a rooftop deck above the garage. 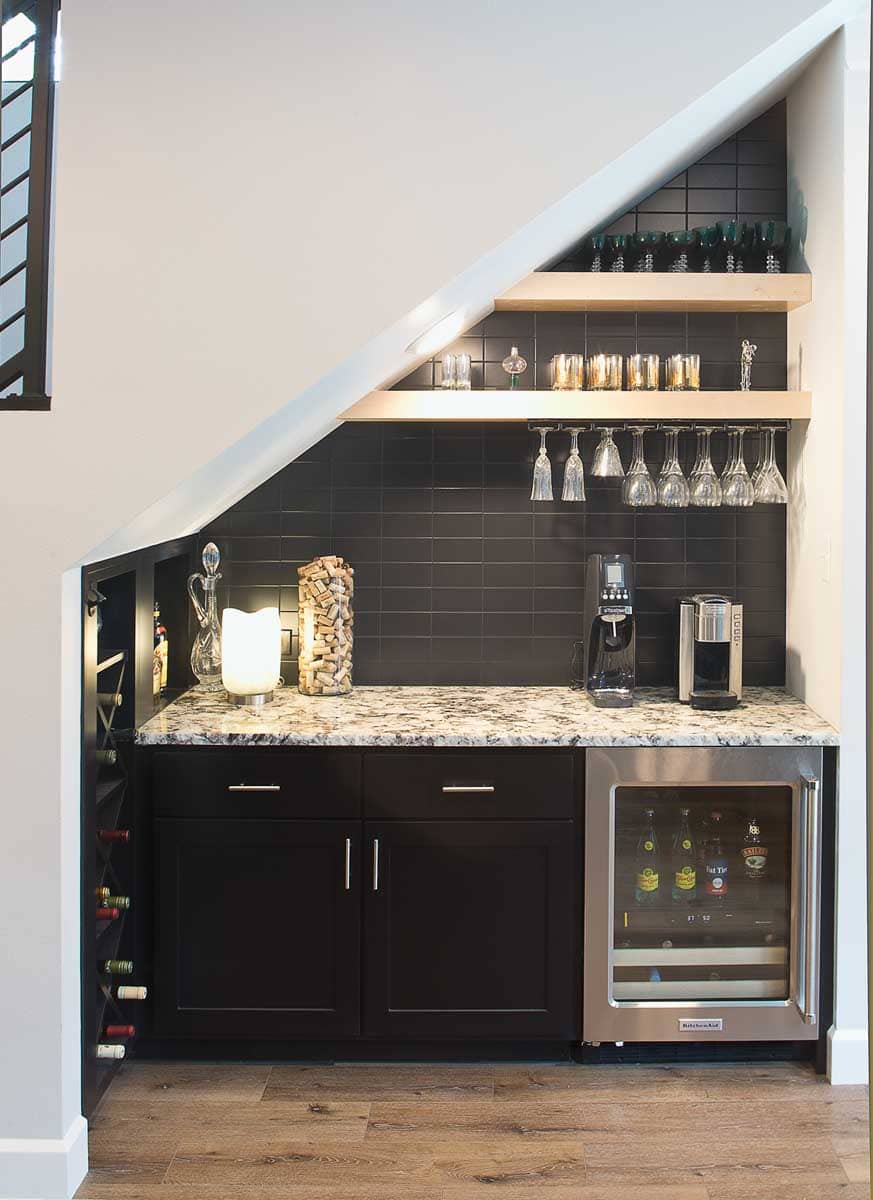 Jackie suggested a small bar to use the space under the stairs. It features a generous work space, beverage fridge, built-in wine rack and floating shelves for stemware.

The empty nesters — Jackie owns two locations of Big Frog Custom T-Shirts and Steve works in the rail industry — were living in Aledo but wanted a place in Fort Worth, preferably in Arlington Heights or the Cultural District. They moved downtown as their search for a building lot continued. The Pierces happened to drive by the 3 Sisters project and were drawn to the contemporary look and size of the existing house.

The footprint of each home is similar (each home gets a 21-foot-wide slice of the lot), but the builder and architect customize each to the owners’ needs.

What stays the same is siting the homes to take advantage of passive solar principles, including avoiding the western setting sun; and the use of awnings, overhangs and trees to aid in shading; the use of sustainable and green building materials inside and out, including energy-efficient windows; the single-slope, standing-seam metal roof; and use of SIPs, thick pieces of foam sandwiched between OSB (an engineered wood), for strength, airtightness and energy efficiency.

Jackie and Steve definitely had some ideas of their own, too. They are quick to praise both builder and architect for working closely with them to create a truly custom design for the 2,400-square-foot home (including the garage).

“We met with Don Ferrier and the architect, Daniel Van Kunschik, to talk about what we wanted: definitely modern and open, but we had some specific requests: no polished concrete floors (a wood composite tile is used downstairs, with eco-friendly carpet upstairs) and a workout room on the second floor.” There were other floor plan druthers, too. Next door, the kitchen is in the front of the house and the main entrance on the side. This flexibility is exactly what the builder and architect had in mind in creating the basic house plan.

“The design work took about six months,” says Jackie. “Unfortunately, it took about a year and a half to build due to code issues. There was some resistance in the beginning, which led to variance meetings at city hall, but once neighbors were able to see what was being built, they had a better understanding of the project.”

The Pierces moved in this past December and have quickly adjusted to their new digs. The concept of living so close to your neighbor might not appeal to everyone, but it suits the newest residents of the development.

While the Pierces don’t have the typical backyard, they have five outdoor spaces, including a rooftop deck. A side porch is protected by a deep overhang, and the porch between the main house and the garage is big enough for furniture, a small fire pit and a grill. The large kitchen windows open, creating a pass-through to a small counter outfitted with stools. 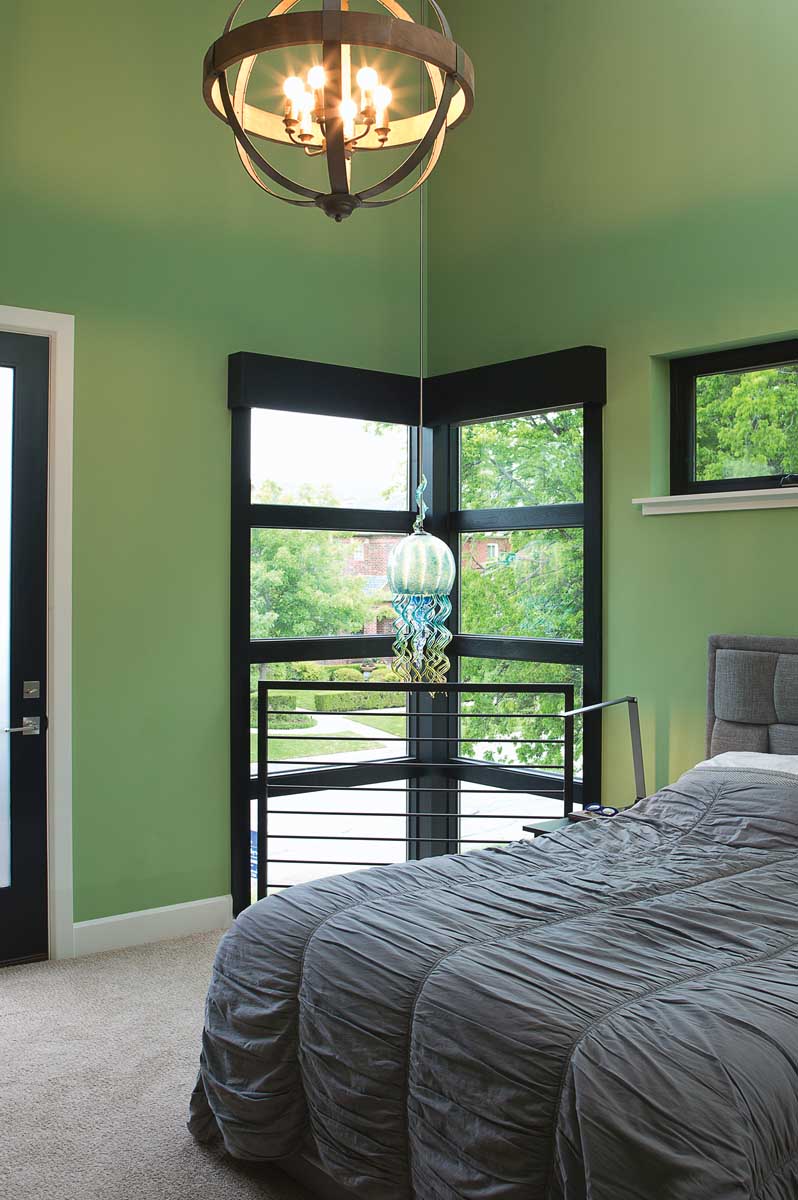 The second-floor master bedroom is painted an earthy green, giving the space a warm feel. The corner window extends up from the living room, giving the Pierces the perfect place to hang a piece of glass art. The door leads to a roomy balcony that faces the street. 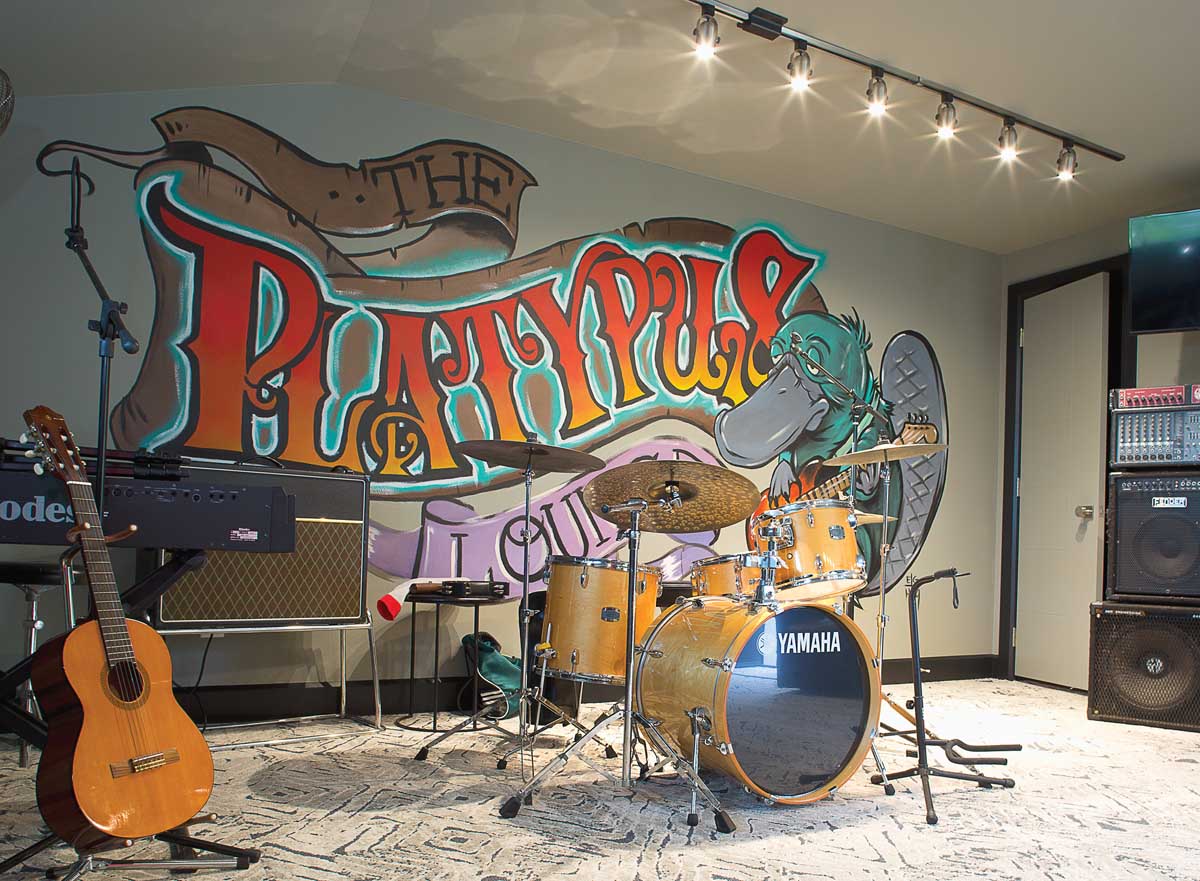 Steve, a musician, turned the room over the garage into a soundproofed studio dubbed The Platypus Lounge. The custom mural is by Fort Worth artist Eddy Herrera.

“We love being outside,” says Jackie, as does Shelby, their Australian shepherd. “The patios are roomy and feel private.” She recently added plants and a watering system to the rooftop deck, which features subtle LED lighting built into the rail and into the steps leading to the third floor.

Shelby has special access to the outside via a dog door built under the inside stairs. The architect utilized the space to build in a small sleeping area for the pup.

While the house isn’t lacking for windows, including an interesting two-story corner installation, there are no windows in the Pierces’ west-facing wall, which also is closest to their neighbor. The sun isn’t an issue, nor is privacy, plus the thick, insulated walls also act as a sound barrier. The rooftop deck is unique to the Pierces’ home, as the neighbors opted for solar panels on top of their garages. “The house is incredibly efficient, so our electric bill is low even without the solar,” says Jackie. Only the water heater and a small fireplace use gas.

With a spacious two-car garage, a bonus studio for Steve, loads of cabinets in the kitchen and a large walk-in closet in the master, the Pierces don’t feel compromised on space.

“Coming from a large home, it has been amazing to see how simply we can live. The modern design makes being more of a minimalist easier.”