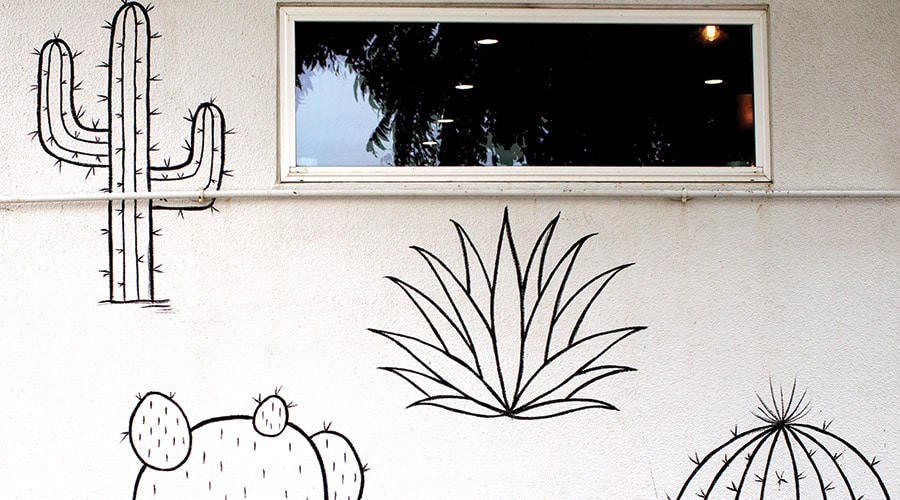 Sarah Ayala has decorated cakes, pinstriped cars and painted signs. “All I really ever wanted to do was draw,” says the 27-year-old, who was born and raised in Arlington Heights.

In high school, she worked on her art on her own time and also took a formal class. Her teacher encouraged her and put her work on display.

“All the adults in my life always have encouraged me,” she says. “When I was young, my parents would take me and my sister’s art and hang it up on the wall. I took dance classes, and they supported me. That stayed with me.”

Her mother, now in her 40th year of teaching, encouraged Sarah to attend TCU, her alma mater, with visions of her daughter becoming a teacher, too. “After a year, I realized college really wasn’t for me. All I wanted to do was create stuff.”

Fort Worth’s art scene was different then. There were the museums, the established galleries and those individuals on the fringe. Ayala was still experimenting and exploring. She joined an art collective called Art-Hunger shortly after leaving school. She studied and read all she could on Eastern philosophy and psychedelics. Her work gravitated toward geometric designs such as mandalas. In Asian cultures, they are symbols of prayer and instruments of meditation.

Ayala often traveled to Austin for shows and to paint on-site at events. In Fort Worth, she was invited to paint during performances by Leon Bridges and the Quaker City Night Hawks at Lola’s Saloon on 6th Street.

The discovery of some old National Geographic maps led to the artist’s experimentation with graphic optical designs using latitude and longitude lines, but she was still restless. A few years ago, she packed up all her work, including the maps, and moved to Boulder, Colorado, for a baking job. While there, she got a long-distance commission from Bill Bostelmann, owner of Flowers on the Square. “He told me my work was ‘everything,’“ Sarah says with a smile. “It did help me pay my rent.” 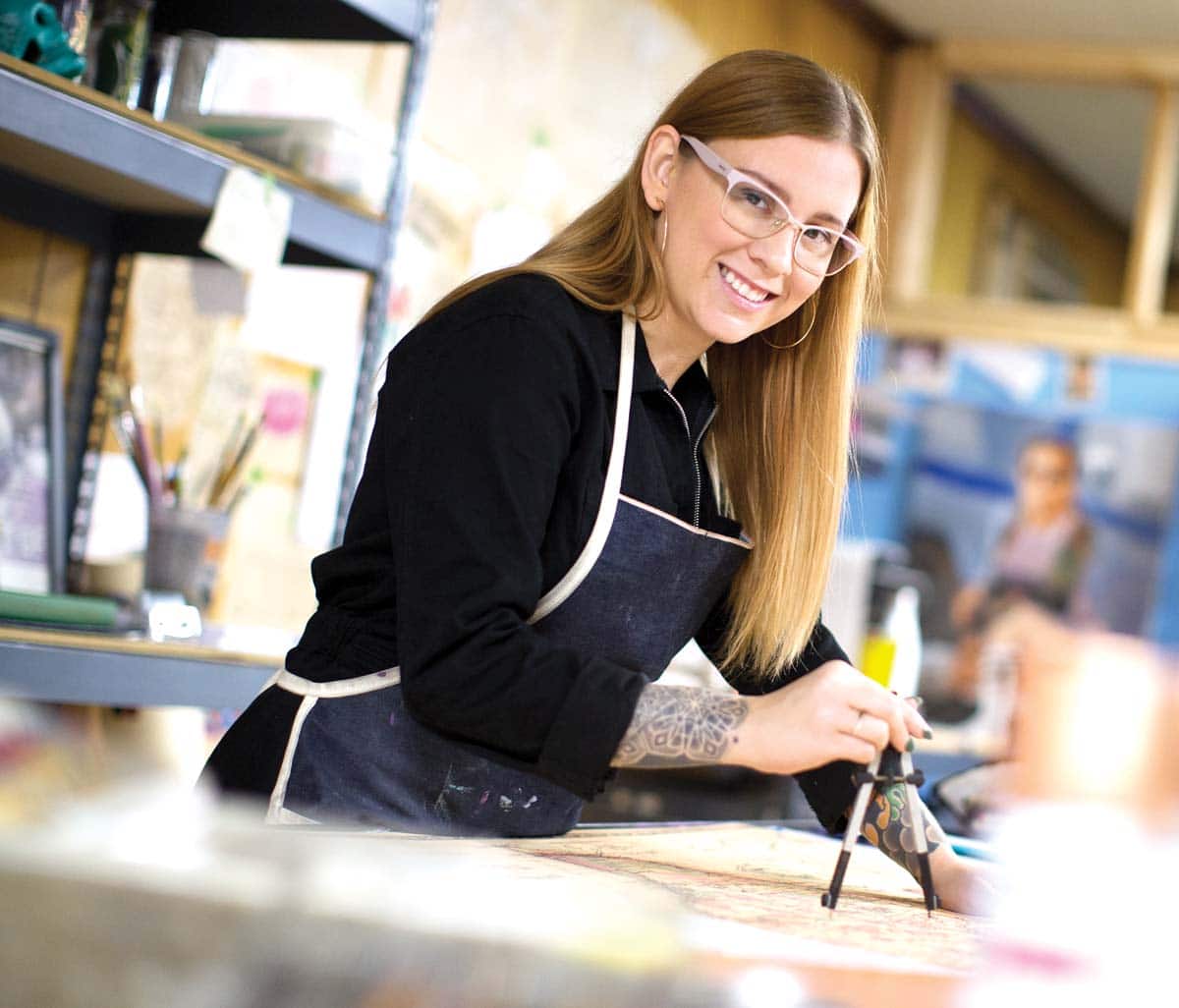 Sarah Ayala at work in her Arlington Heights studio, which is part of her father’s longtime business off of Montgomery Street. 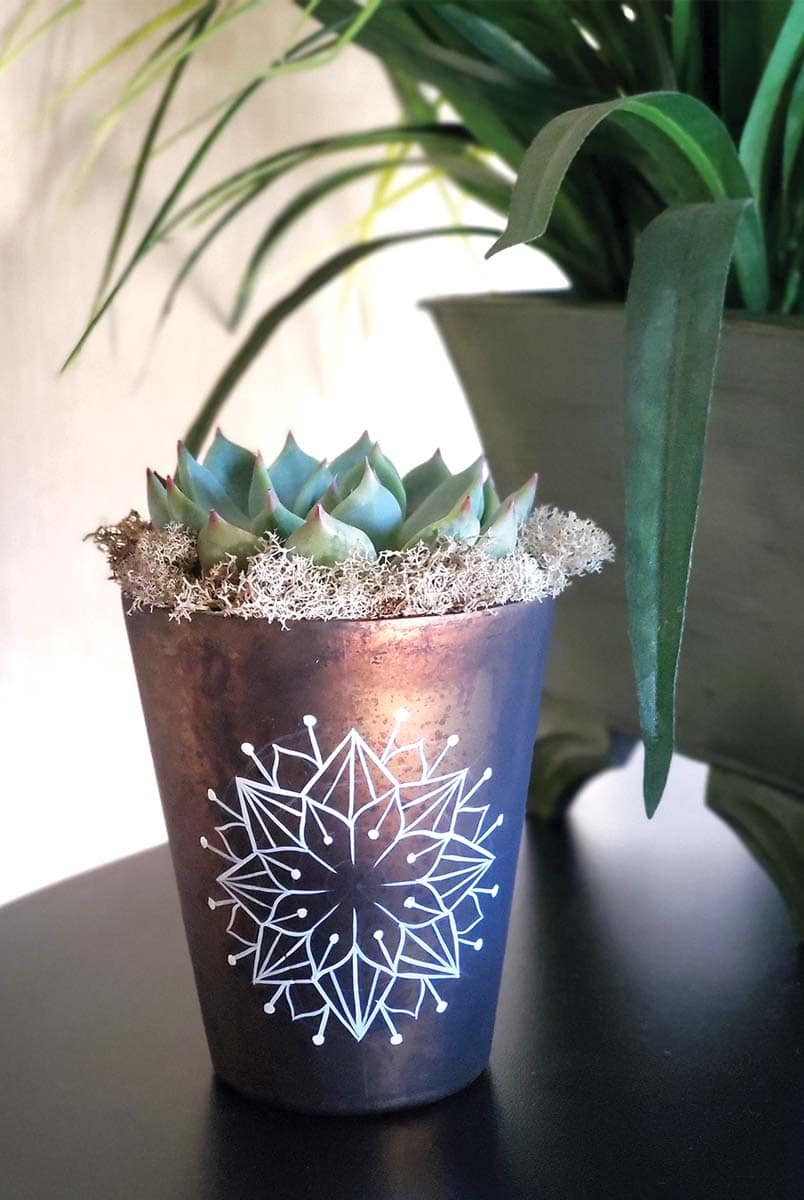 Fort Worth beckoned, and she moved back. Her artistic focus had shifted a bit, too, and she found herself doing more pinstriping and sign painting, which she found rewarding because of the precision required.

Today, Ayala continues to paint mandalas, sleuthing out interesting and unusual maps. Her distinctive work can be seen at local businesses, such as the cactus silhouettes at Taco Heads on Montgomery Street and at The Greenhouse 817 production warehouse on the southside of Fort Worth, owned by Deryk Poynor, her sister-in-law. When Sarah’s brother, Joseph, opened Panther City Tattoo on South Main Street, he looked to his sister to paint the distinctive black cat mural at his shop.

Ayala also made a meaningful connection with Jessica Fuentes of the Amon Carter Museum of American Art. Fuentes is an artist and manager of school and community outreach at the Carter, which is broadening its scope locally. She discovered Ayala after seeing her work  with the Northside Boys & Girls Club. The two then worked together on a project with the city community centers. “I was blown away by how great the kids were to work with,” says Ayala. She also helped students at an alternative school in Fort Worth create a mural and, at the same time, strengthen and improve their self-image.

Ayala is growing up, too. And she’s staying busy with multiple projects. “I’m a little more grounded now,” says Ayala, who applied for and in October was named one of four Carter Community Artists, the yearlong program at the museum that helped prompt her to work with kids. She helps plan and lead programs at the Carter, does community outreach and participates in creative projects, from lectures to workshops. “It’s more of what I’ve been doing, with room to grow and the chance to offer more ideas.”

She’s also expanding her work studio in the AA Laser Recharge building on Dexter Avenue, which belongs to her father. There, various drawings fill the paneled walls and works in progress await her on a large worktable. “It’s been here since 1991, and I’ve been coming here forever. It feels like home.”