By Elizabeth Frenzel November 6, 2019 No Comments 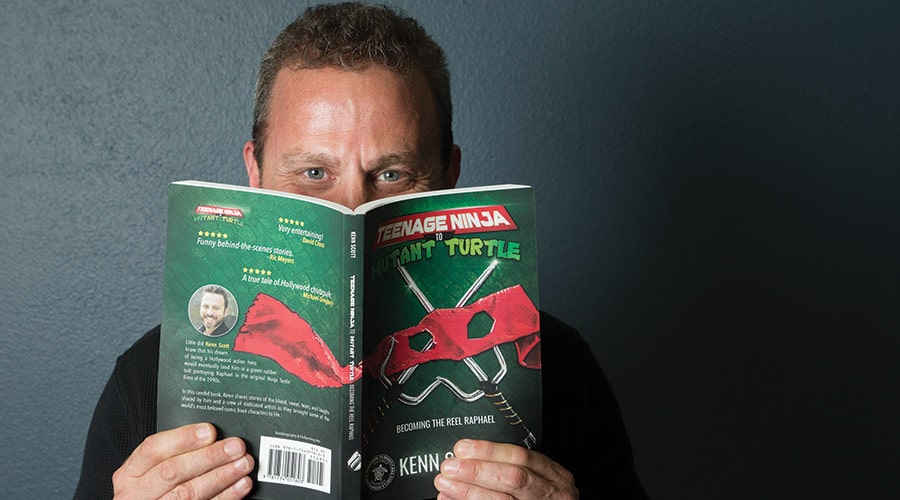 What started as a black-and-white comic book has morphed into a franchise with surprising staying power. Kenn Scott’s new book covers his short, but sweet (and sweaty) film career as Raphael.

While I admittedly knew little about the Teenage Mutant Ninja Turtles, I am pop culture-aware enough to know that they were very popular in their day. Several Halloweens passed with many a young trick-or-treater on our doorstep — boys and girls — dressed up as their favorite green crime fighter.

When I learned that Kenn Scott, the man who played Raphael in the first two feature films, lives in the 107 and had written a book, Teenage Ninja to Mutant Turtle: Becoming the Reel Raphael, about his experiences, I was intrigued.

While this martial arts expert is still in fighting shape, he now is creative director at Avadel, a local digital advertising agency. Scott agreed to meet with me and talk about the book, life as a Turtle and why he’s now living in Fort Worth.

Now 52, Scott has come a long way from sneaking onto a movie set to get a glimpse of movie life and working long days in a sweaty latex suit. But he embraces his past, even the embarrassing parts. “I grew up wanting to be an action hero in the movies,” says Scott. “I just never thought I would get my start wearing a Turtle suit.”

A native of New York, he and his brother grew up in North Carolina. He took karate lessons after dealing with a school bully. He read all the books he could about the martial art and finally persuaded his dad to pay for lessons. He earned his black belt when he was 17. With bona fide ninja skills on his resume, Scott next signed up for drama classes, eventually making bad home movies with friends. But his dedication and focus led him to his first big break, which happened near his hometown instead of in Hollywood. 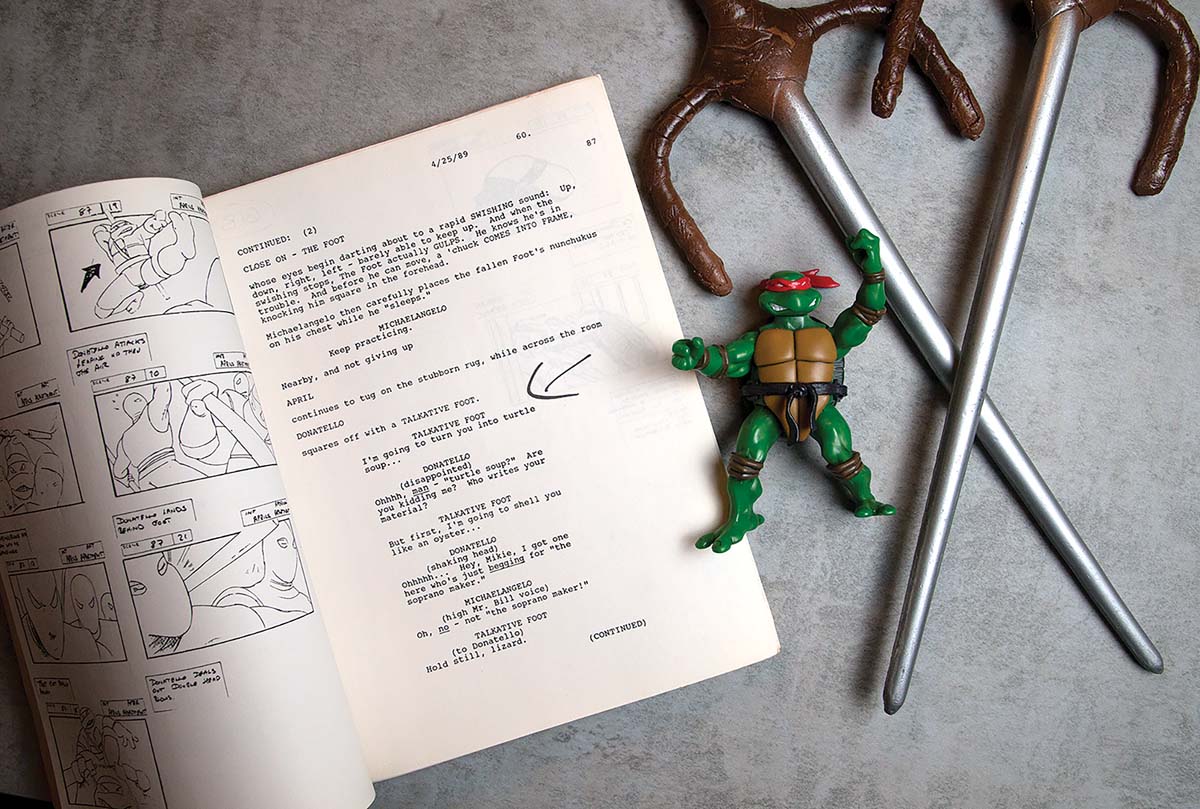 Kenn Scott doesn’t have a lot of memorabilia left from his Turtle days, but he does have an original script from the first movie, which was made in 1989. 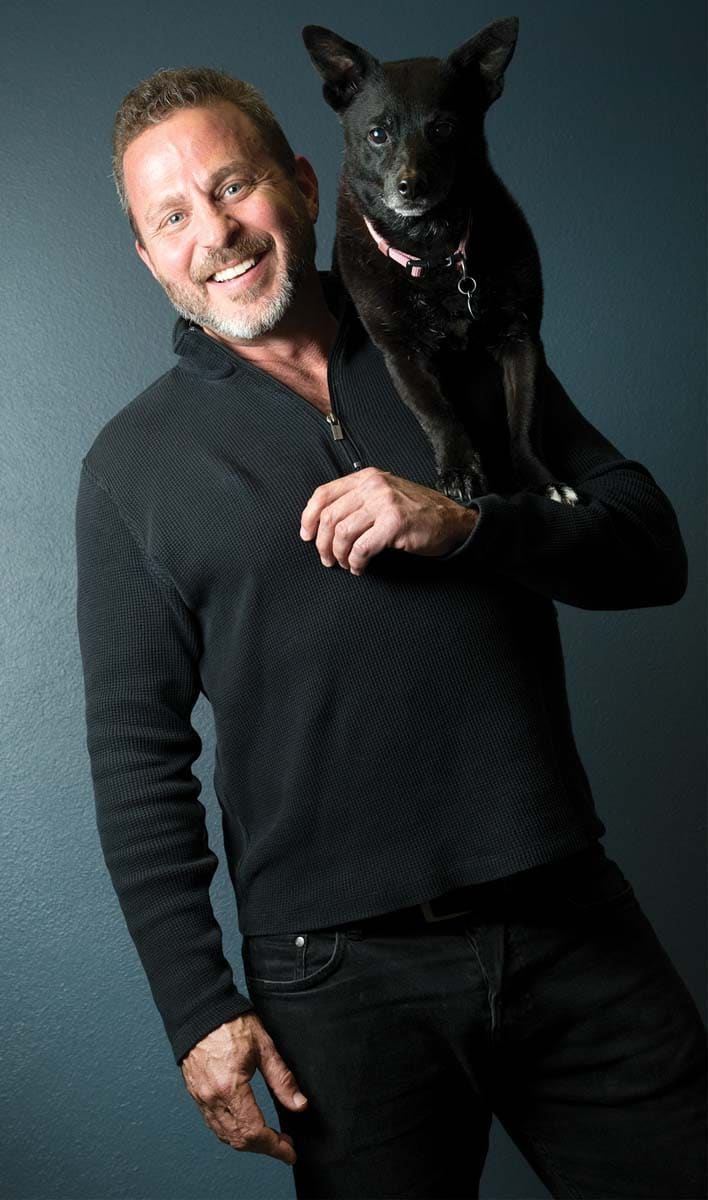 Scott with Kona, his rescue dog.

“My parents were always very supportive and told me to go for it,” says Scott, who recounts his martial arts audition for the first Turtle movie as being exhausting and exhilarating because it got him into the movie. “I do believe it when they say, ‘Luck is when preparation meets opportunity.’ I was lucky, but I worked and trained hard to be ready when I got my chance.”

The book is full of Scott’s experiences, from his first time on set to the day he got speaking lines and earned his Screen Actors Guild card. He also offers nuggets of information and history about the Ninja Turtles themselves, especially to this novice: The films were shot in Wilmington, North Carolina. Producer Roger Corman had hoped to get involved and wanted to cast comics such as Billy Crystal and Sam Kinison as the Turtles with green-painted faces. The costumes were designed and built by Jim Henson and his crew. Special chairs had to be built so the actors could sit down in the Turtle suits.

Scott also name-drops in funny and nonpretentious ways: He spotted George C. Scott on a studio lot and all he could manage as conversation was a quick reference to the weather. He also gave Keanu Reeves a guitar lesson. And he accepted a sandwich from Barbara Walters when she did a TV special on the Ninja Turtles.

Scott packs a lot into the tell-all book, considering his film career as a Turtle essentially lasted the year it took to make the first movie — which turns 30 in March 2020 — and the sequel. For budding actors, it’s a good read as to how perseverance pays off. “It was an amazing experience and a stepping-stone to a movie called Showdown, where I didn’t wear a costume and was a blatant copy of The Karate Kid,” says Scott. “But it did beat out an Al Pacino film at the box office for a brief time.”

Scott found work in other films as an actor and stuntman. “I’ve worked for 20 years making a living as an actor, writer and director.”

Of course, he did eventually end up in Los Angeles. He moved to Texas six years ago; Scott’s brother is a hand surgeon in Southlake, which gave him a temporary place to land. “I lived there [in LA] for 22 years, but I missed my family. After moving here, I discovered Fort Worth, which felt so real. I was driving on Camp Bowie and knew I wanted to live near that brick street.”

Since he’s been in Fort Worth, Scott also earned a master’s degree from Tarleton State University, and won the Fort Worth Business Plan Competition with a child enrichment video used by Fort Worth Public Library.

He admits he misses the excitement that comes with making movies — he even made films for the CIA — and still attends conventions to meet Turtle fans. “I also miss the ocean, but I’m lucky to live near the museums and galleries like Fort Works Art,” says Scott. “Then there’s the Trinity River and access to places like the Fort Worth Nature Center.” And naturally, like his green counterpart, he loves pizza. 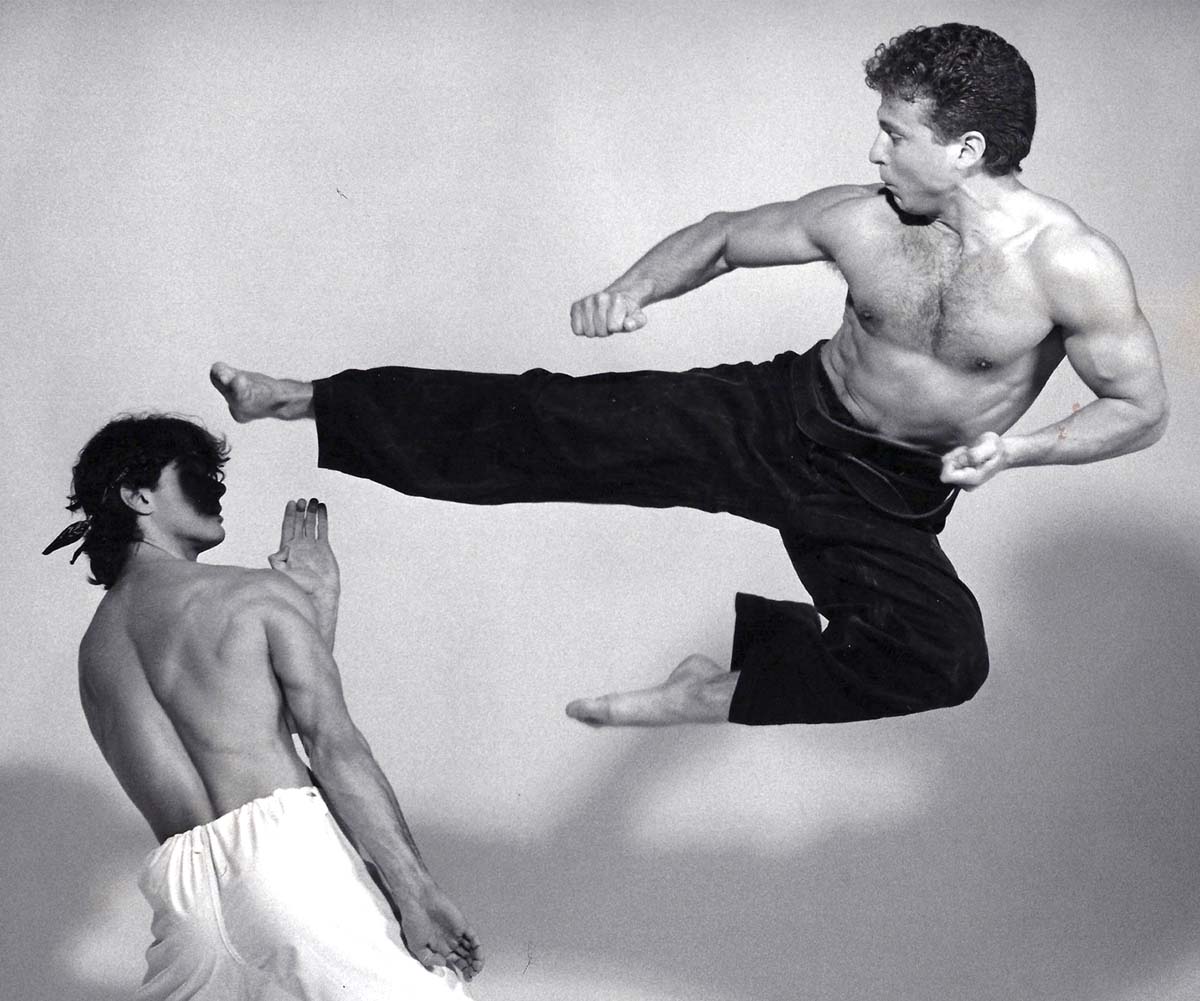 Scott took his martial arts training seriously, which helped land him a role on the original Turtle movies.
Photo courtesy of Kenn Scott

Teenage Ninja to Mutant Turtle: Becoming the Reel Raphael Kenn Scott’s book is available via amazon.com. A portion of the sales benefits the Sea Turtle Conservancy, a nonprofit that promotes protection of turtles and their habitats.