Press enter to begin your search
FeaturesOut and About 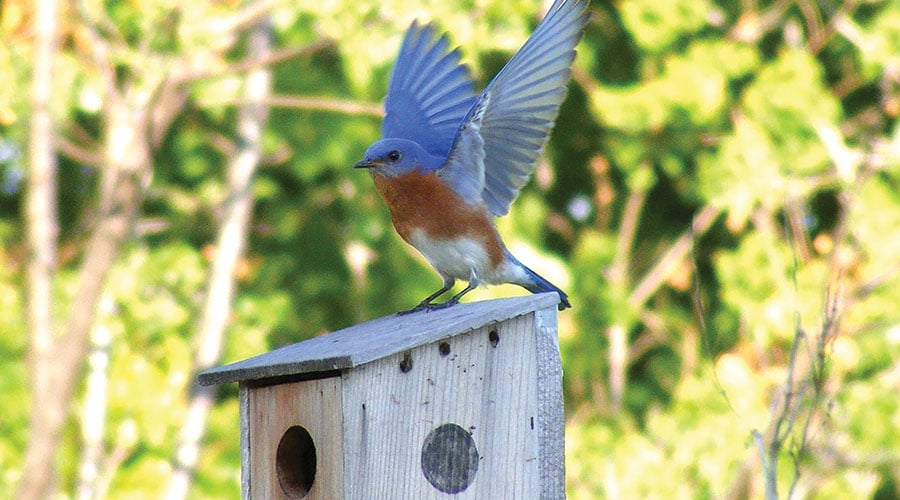 Tweets Along the Trinity

“A bluebird carries the sky on his back.”
—Henry David Thoreau

If you jog, bicycle or walk along the Trinity River and nearby trails, be on the lookout for flashes of blue.

Thanks to Jim Marshall, bluebirds now are regular visitors to parts of Fort Worth. In 2007, he was hiking along the Trinity River when he spotted two bluebirds — their brilliant color making for what Marshall calls a “wow” moment. Although often found in rural communities, at that time bluebirds were not common in urban areas. Marshall had some aviary knowledge and knew that they required a natural cavity or a manmade nest box for reproduction. He saw an opportunity to grow the bluebird population and contacted Streams & Valleys (a nonprofit organization that works to beautify and promote the river) to request permission to install five nest boxes along the Trinity Trails between University Drive and Bryant Irvin Road. These boxes officially launched Project Bluebird. 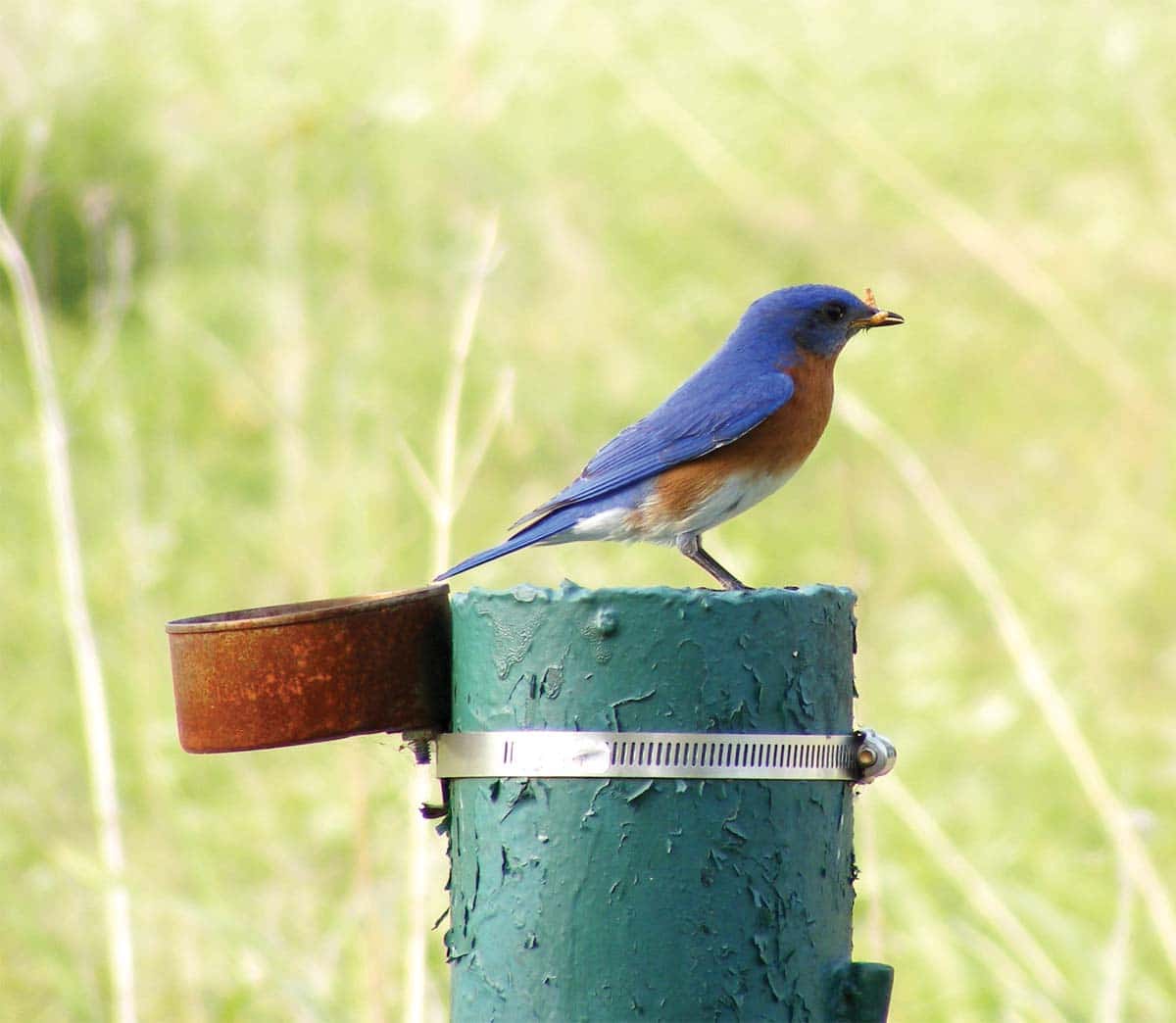 Volunteers have attached containers to the poles in order to provide treats of mealworms for the bluebirds. 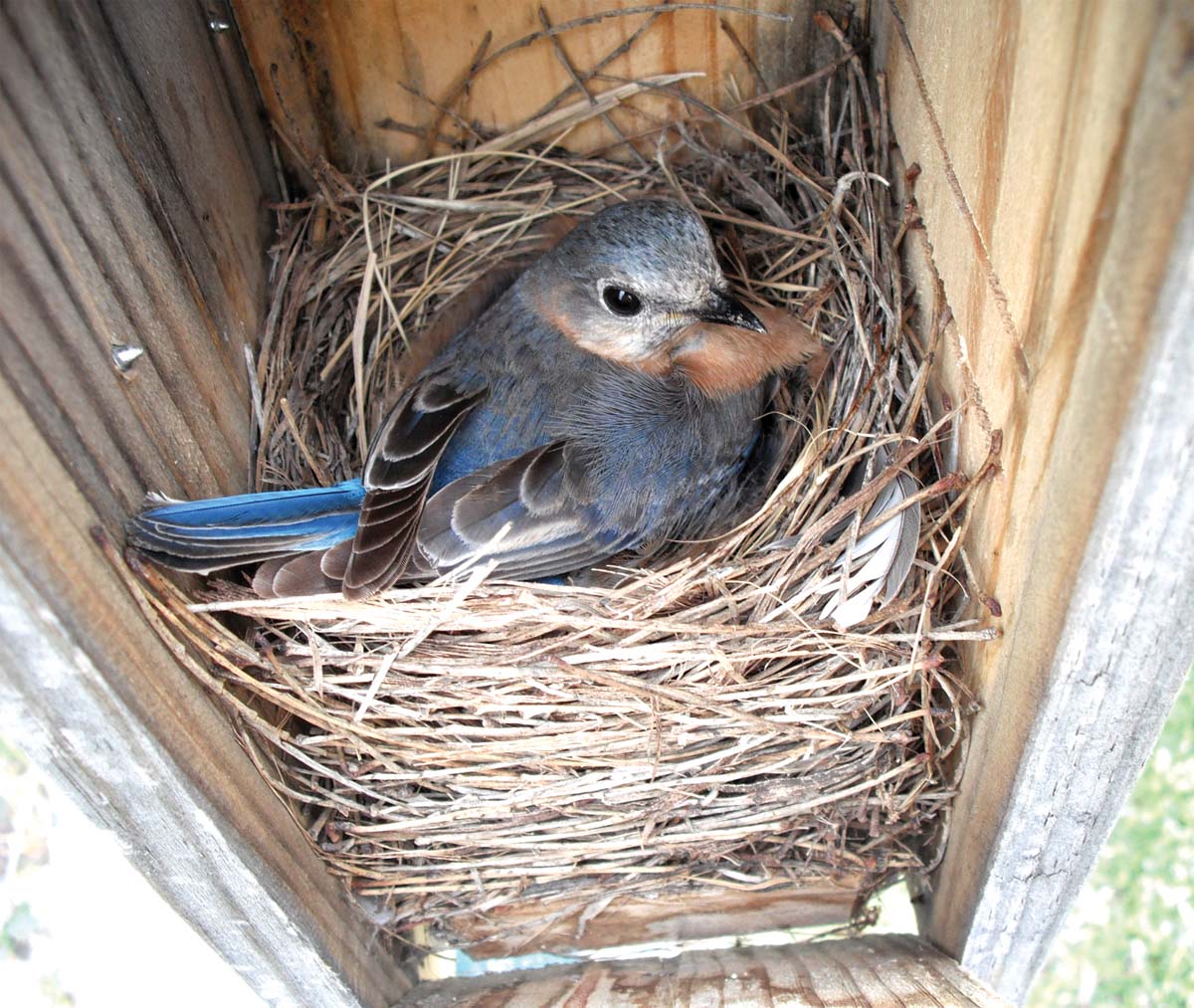 A female warms her eggs.

A few weeks after this first installation, Marshall was thrilled to find nest material in one of the boxes, followed by lustrous blue eggs.

“It was pretty exciting to open the door of the box and see that radiant color,” says Marshall.

In the following years, more boxes were installed along the Trinity Trails as well as at the Botanic Garden, Mount Olivet Cemetery, the Pecan Valley and Rockwood golf courses and Tanglewood Park. Today, the total count is more than 100, with Marshall coordinating 20 dedicated volunteers who monitor and maintain the boxes and record nesting observations.

Marshall’s sister, Roberta, collects data from the various volunteers and inputs findings into NestWatch (nestwatch.org), Cornell University’s research website. She also serves on the board of the Texas Bluebird Society (texasbluebirdsociety.org), whose motto is “Bluebirds across Texas, one nest box at a time!”

One of the original five boxes in 2007 produced three batches of eggs, chicks and fledgling bluebirds that first year. Since that time, more than 3,000 fledglings have entered the wild from the Project Bluebird nest boxes.

“From the day the eggs are laid until hatching takes about two weeks. The babies remain in their nest until they are able to fly away — about three weeks. During this time, even the father birds participate in caring for the babies by bringing food to the mother or giving it to his babies directly,” Marshall says.

Bluebirds love mealworms, and Maryann Coleridge, another volunteer, raises them by the thousands, ensuring the baby birds have plenty of treats in addition to what they get from the adult birds. “Raising mealworms is hard work, but I’m captivated when I watch the fledglings with all their antics as they jump into the feeder, delighted to find their dinner,” Coleridge says.

Betsy Booth has been a bluebird volunteer since 2013. Booth checks on her allotted boxes every week during the nesting season, February through late July.

“Being a bluebird monitor is like having Christmas every week,” Booth says. “I get to open boxes with wonderful surprises inside. The same birds come back to their homes every year. I can tell them apart by their personalities, meaning how well they tolerate having their boxes opened and their nests examined. Some of the males are quite aggressive and, at times, have divebombed my head, coming so close that the wind from their wings blew my hair. When I see the offspring leave my boxes, I feel like a proud parent.”

Streams & Valleys continues to stay involved by hosting an annual Project Bluebird reception before nesting season. “The bluebird boxes are a great way to help educate citizens and to celebrate our river, particularly for kids,” says Stacey Pierce, executive director for Streams & Valleys.

“Any day you see a bluebird is a great day,” Marshall says. 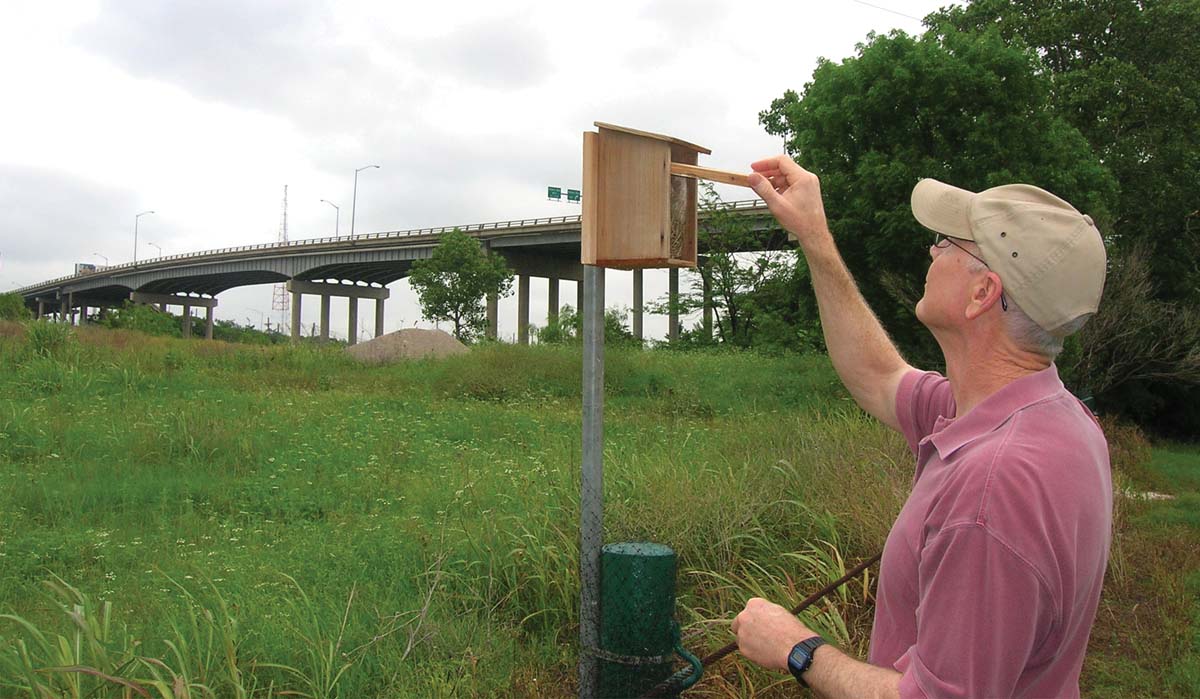 Jim Marshall checks up on the boxes that are part of Project Bluebird along the Trinity Trails.

Project Bluebird Please do not open a nesting box. They are fully staffed as far as volunteers, but if you would like more information about bluebirds, contact Jim Marshall at jmarshall3@sbcglobal.net. If you’re interested in setting up your own box, check out the offers on the Texas Bluebird Society website, texasbluebirdsociety.org.