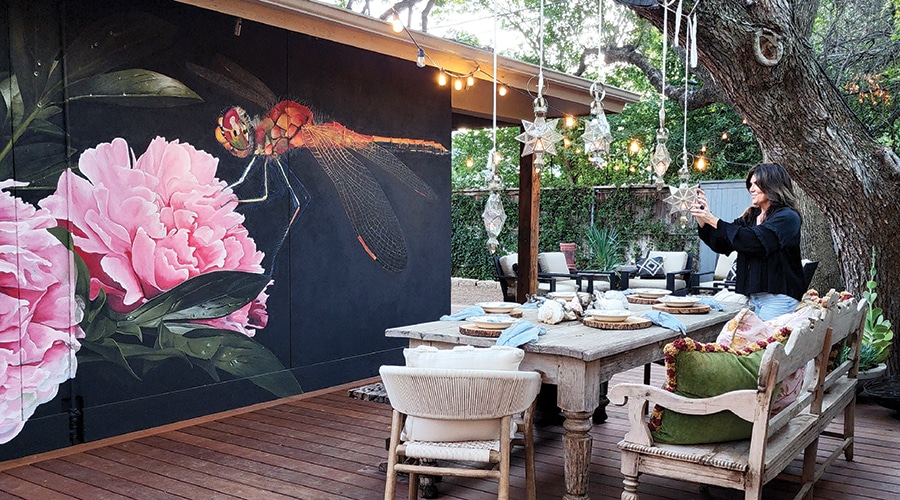 Photos and text by Meda Kessler

Wood smoke from a dancing fire curls up and out through the chimney. Hanging glass lanterns over the dining table twinkle in the light breeze. A pile of blankets on the sofa beckons as the sun sets.

It’s the magic hour in Amy Young’s backyard, which has been reimagined as an extension of her 1964 home in Crestwood.

The rock fireplace and sunken flagstone patio, accessible by a door just off the living room, were already in place when Young bought the home. She has added an ipe deck that runs the length and width of what had been the home’s sideyard.

Young, a native of Alabama but a longtime Fort Worth resident, bought this rustic-modern oasis for its beach-house feel and possibilities. She first concentrated on the interior and finally turned to the home’s L-shaped yard this past summer. 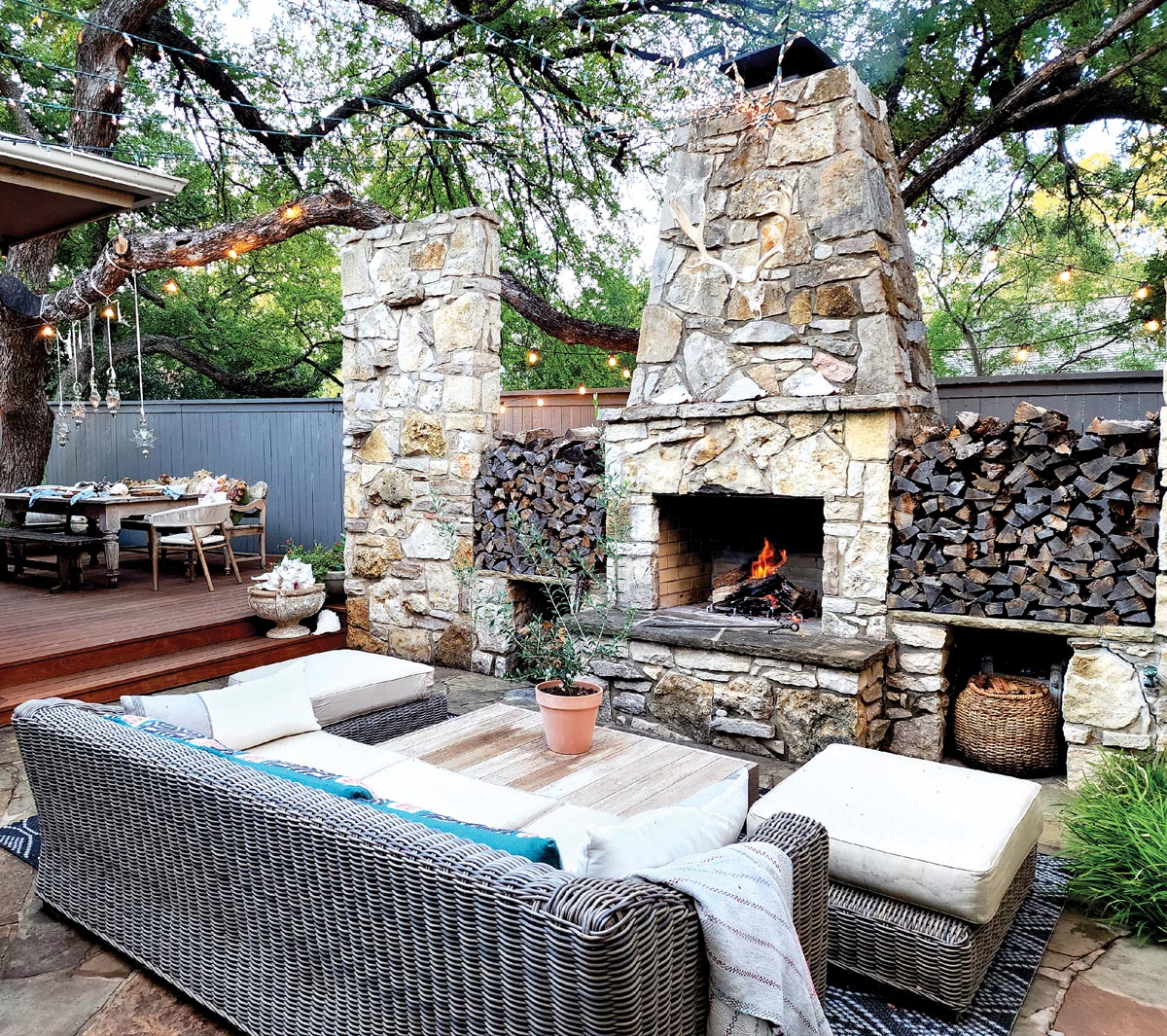 Amy Young’s outdoor space got an upgrade with the addition of a stained ipe deck that extends from the patio to her back fence. 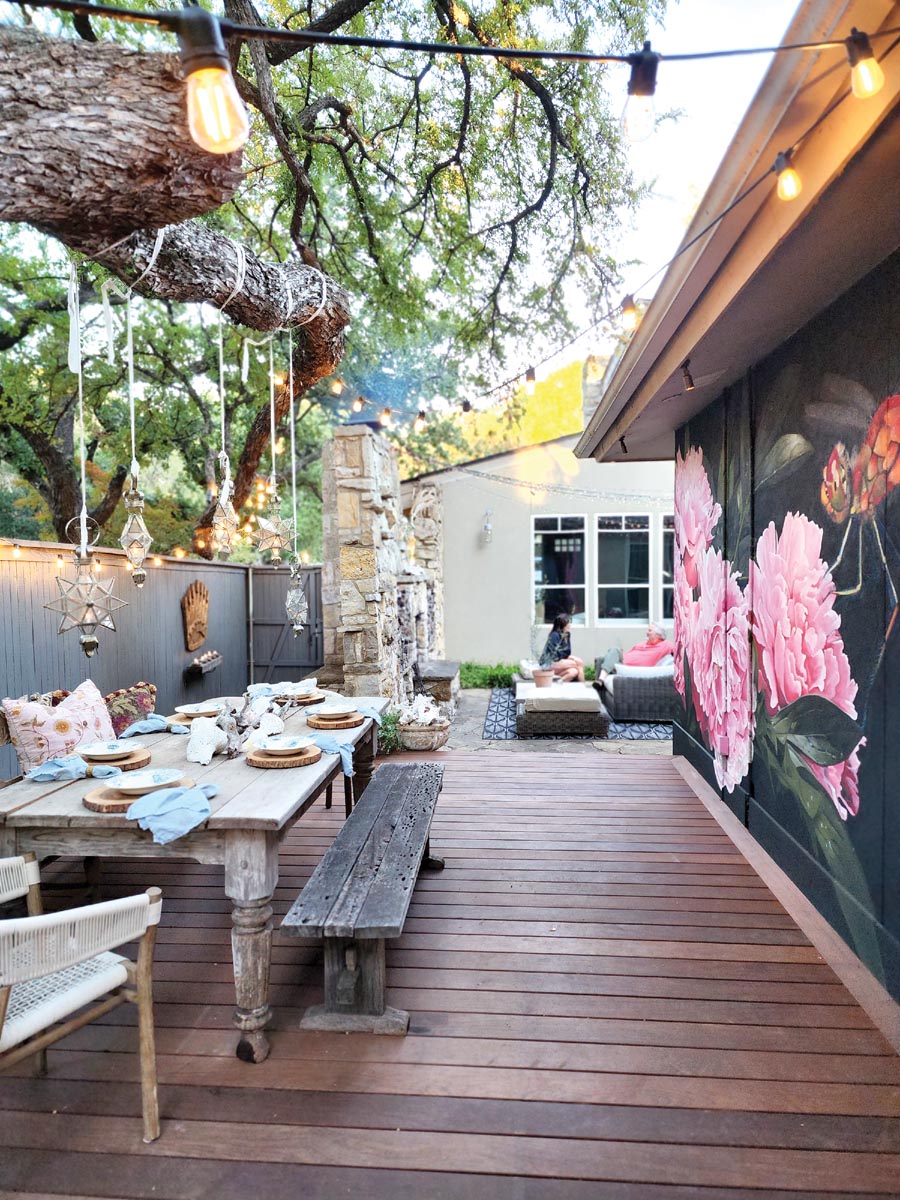 The vivid mural by local artist Jimmy Joe Jenkins makes the dining area even more appealing. Young loves the look and feel of weathered wood furniture, including an antique teak bench. In the evening, candles and hanging lights cast a warm glow over the space.

“I wanted to have my son’s engagement party here in August, so that helped jump-start the project,” says Young, who turned to Penn Peck, an Aledo homebuilder with whom she had worked previously. “He brought my vision to life.”

The old multilevel deck was gutted and replaced by the expanse of ipe. It runs from the side of the home to the fence, with space cut out to accommodate the old oaks. There’s now room for a dining table as well as another seating area, which also is accessible from Young’s bedroom. String lights provide illumination, as does carefully placed landscape lighting in and around the trees.

The backyard is taking shape, too. It’s now filled with pea gravel, with plans to plant cactus and agave. A pair of patio chairs and a coffee table sit under an outdoor chandelier hanging from the wide-reaching arms of a beautiful oak.

“I wanted this corner spot to be an extension of the guest bedroom, a private space where one could have morning coffee or a glass of wine,” says Young.

An artist herself — check out her work at amyoungart.gallery, Young (amyoung.gallery) considered adding a mural to a long, blank wall as a finishing touch. Instead, she turned to friend and fellow artist Jimmy Joe Jenkins (instagram.com/jimmyjjenkins).

“I didn’t have to give him a lot of input,” says Young with a smile. “From our conversations, he learned that I love peonies and dragonflies and came up with an incredible piece in eight days, picking out the perfect colors and working in the heat.” 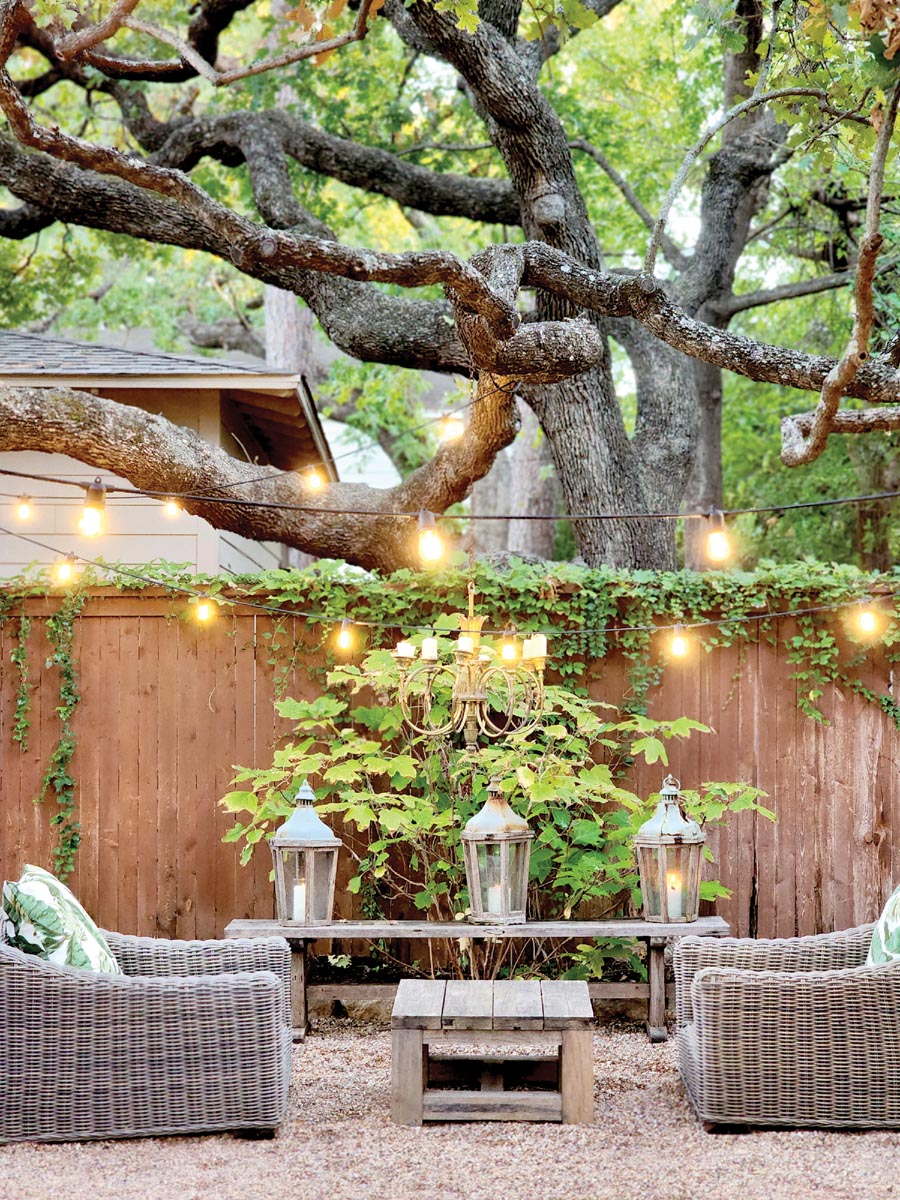 The branches of an old oak form a canopy over the backyard, including this quiet space located off the corner guest room.