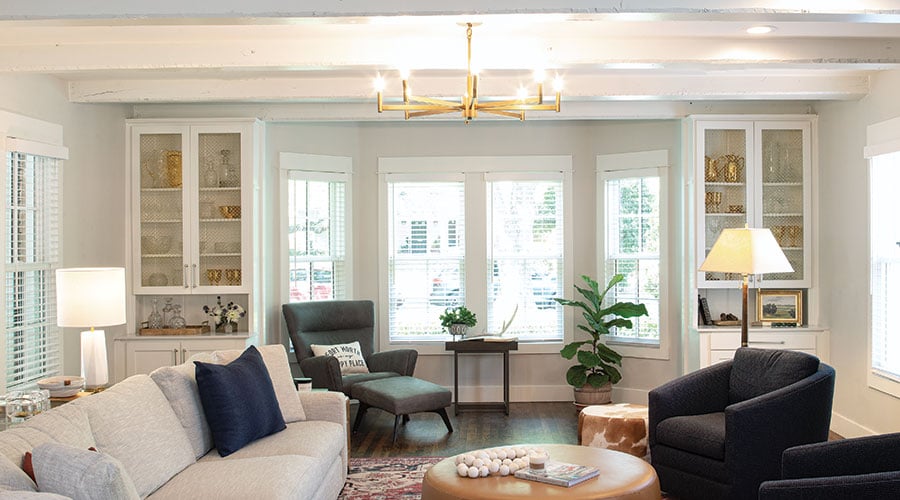 Our original intention in featuring this 1938 Arlington Heights home was to showcase the spot-on remodel with a clever reuse of space and designer details.

But once we learned that it has been home to three generations of one family, we were quite taken with its history, including the fact that author John Graves lived nearby at one time.

The tree-lined blocks of Hillcrest Street south of Camp Bowie Boulevard, with their eclectic mix of houses, are among our favorites in the neighborhood. Carol and Tad Hauck have lived here since 2019, when they moved to Fort Worth from Minnesota.

Carol was no stranger to Fort Worth, having lived in Texas until her father’s job took him to New York and then Minnesota in the 1960s. That is where she met Tad, a lifelong Minnesotan. Her parents returned to Fort Worth after her father retired, making it their home until they passed away.

“It was our son who suggested we settle in Fort Worth,” says Carol. Jason Hauck had attended TCU and graduated in 2009. The home had been built and designed as a duplex with two entrances and a single door inside linking one duplex to another. There were some changes made to the home over the years, and Carol and Tad knew they wanted to update and modernize it. Jason’s connections in the building industry led them to architect Kevin Parma, of parmadesign in Dallas, and designer Sara Quinn, owner of 13thirty Designs in Southlake.

“We were living in Minnesota and had to deal with everything long distance, but we knew we wanted to get everything right the first time,” says Tad. Carol envisioned a more modern interior with better flow and use of existing space, but she wanted the remodel to remain true to the original home, too. And she had to oversee the work from Minnesota.

“We maximized our time together when she was in town, stacking our selection meetings and site walks.When she wasn’t in town, we got creative — sharing photos and doing FaceTime calls so Carol could see real-time progress,” says Quinn, who adds that she fell in love with the home anew every time she walked into the house, as she could see the impact and the direction their story was headed. “I wanted Carol to be part of the process even if she wasn’t here in person.” 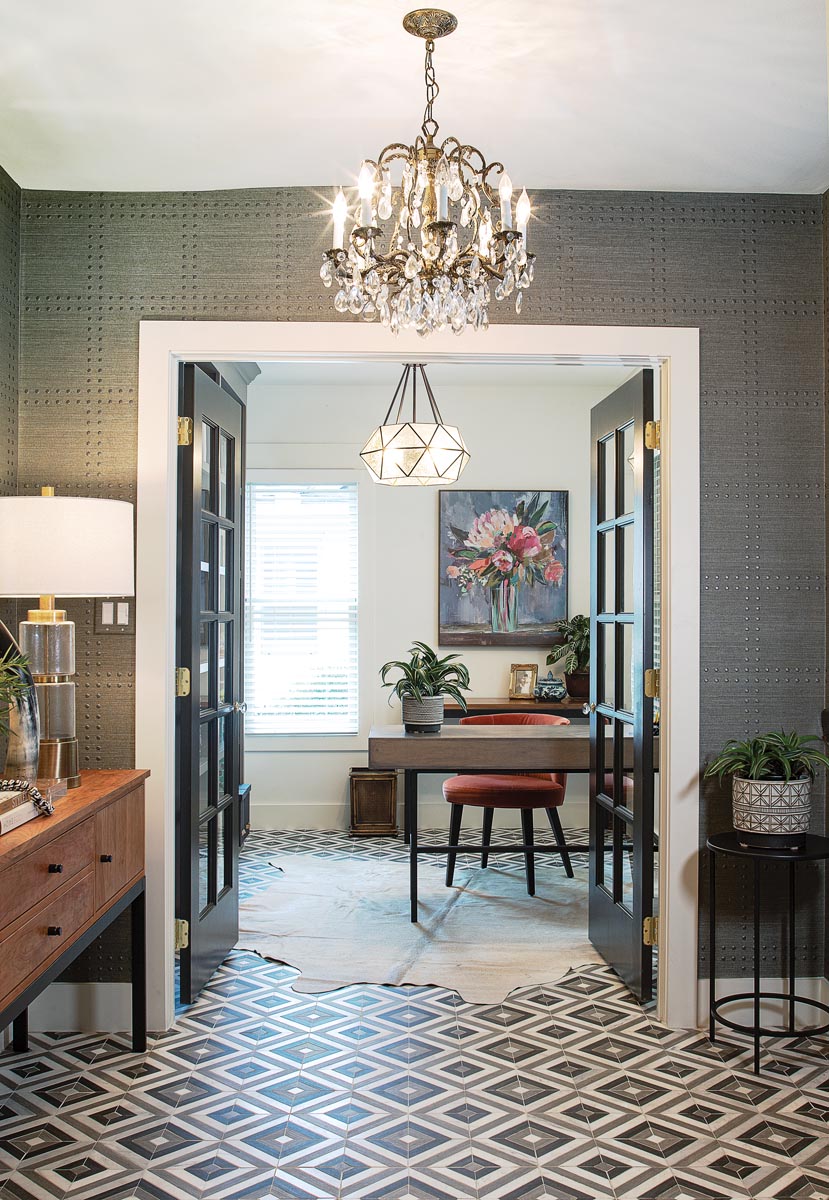 Quinn reconfigured space by pushing back walls to create a foyer and an office with French doors for Carol. For overhead lighting, the designer paired an original chandelier with a more modern design. Phillip Jeffries Rivets wallcovering, with a nickel nailhead detail on graphite hemp paper, complements the bold mosaic floor tile that flows through both rooms. Quinn used existing door hardware when possible and paired new crystal knobs with brass backplates on the new doors. 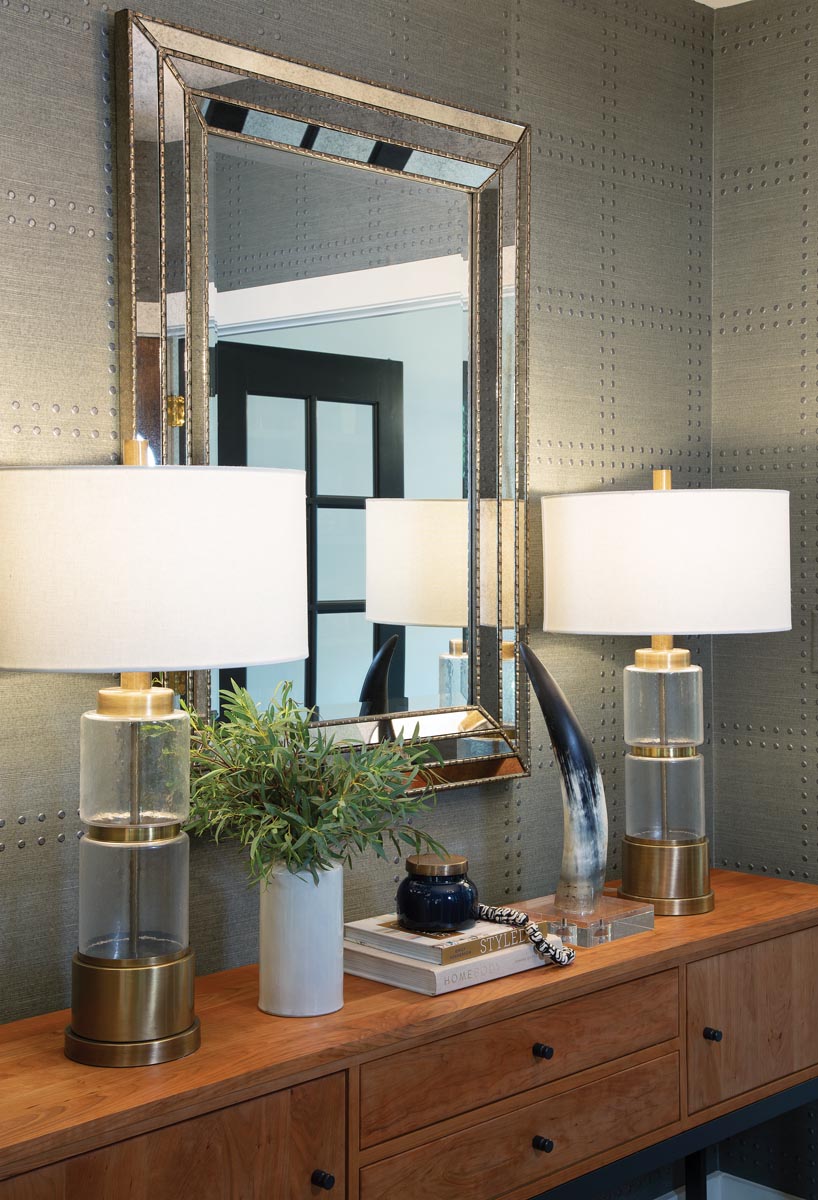 A console table that offers ample storage is topped with a pair of glass-and-brushed metal lamps plus decorative items Quinn sourced from to-the-trade merchants and Round Top vendors.

Quinn also credits a solid working relationship with both the architect and the builder for making the project a smooth one; construction started in fall of 2018 and was completed about a year later.

The new look for the old home begins as soon as you open the front door. Most bungalows in Arlington Heights lack a true foyer, but Quinn was able to carve one out of existing space, plus add an office, complete with French doors, for Carol.

“Originally, you opened the front door and walked into a very tight space. We opened up the entry pushing back the wall a couple of feet to have some breathability. We wanted to make a statement,” says Quinn.

The made-to-order Phillip Jeffries wallcovering, Rivets, features a nickel nailhead detail on graphite hemp paper. It layers harmoniously with the bold floor tile and sets the tone for the rest of the home, which is rich in details.

Despite the original duplex design, the home’s living room, with its bay window, has always been spacious and once held two grand pianos used for music lessons.

Now filled with a comfortable sectional, a pair of swivel chairs and a sitting area near the bay window, it’s used daily for reading, enjoying a movie or doing a little bird-watching.

The living area flows seamlessly into the kitchen, also well-used by Carol and Tad, especially when doing lots of at-home cooking during the pandemic. “We also like to entertain,” says Carol, who looks forward to dinner parties and gatherings with friends and family in the future.

Major changes also were made to the sleeping quarters. What was the biggest bedroom now is a guest room with an attached full bath. (Part of that room was used to create Carol’s office off the foyer.) And Tad now has an office/study that can be used as a guest room.

The midcentury dining table and chairs, both from Room & Board, visually separate the open living room and kitchen space. 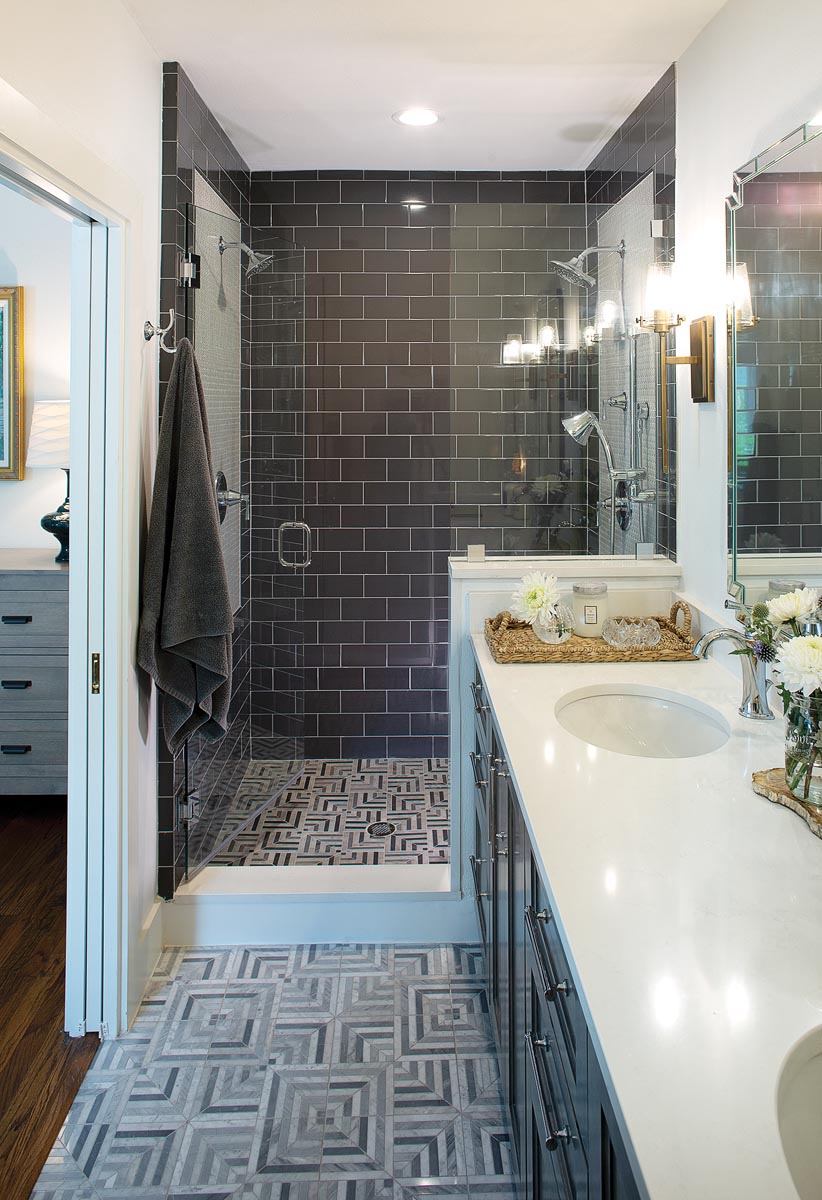 The floor tiles continue into the walk-in shower, which features dual shower heads, a tiled bench seat and a hidden shampoo niche. Luxe touches in the guest bath.

The couple’s new bed-bath suite now is situated at the back of the house. What was a narrow bathroom with a small closet remains a shotgun-style space, but with panache and functionality thanks to the architect. Quinn’s elegant touches include a geometric marble mosaic floor, a double stained vanity with a trio of brass sconces and a walk-in shower faced in dark pewter subway tile.

With guest quarters over the garage, as well, the Haucks are looking forward to visits from family. Tad has embraced Texas summers over Minnesota winters now that he calls Fort Worth home. “Everyone hoped that the house could stay in the family,” he says. “I think Carol’s parents would be happy that we could make that happen.”

“So many memories are here,” says Carol, as she looks around the new-old home. “And now, we can make new ones.”