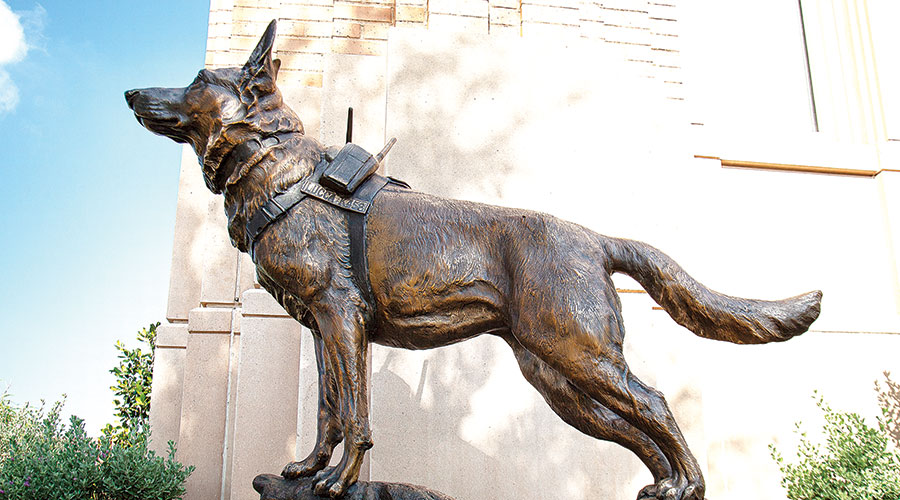 If you haven’t been to the Alice Walton Cowgirl Park recently, you need to go to meet the newest honoree, a war dog named Lucca. (The park is on the south side of the National Cowgirl Museum and Hall of Fame.) Rendered in bronze by artist Jocelyn Russell, the statue is called Send Me. Lucca was a German shepherd-Belgian Malinois mix who served with the Marines for six years and received extensive training to detect bombs. Her record was exemplary: She led more than 400 patrols on her three combat tours in Afghanistan and Iraq and had no human casualties on her watch. A roadside blast in 2012 cost Lucca her left leg. After recovering stateside, she retired that same year and was adopted by her original handler, Marine Gunnery Sgt. Chris Willingham, who first met Lucca in San Antonio during training in 2006. Lucca died peacefully at the age of 14 on Jan. 20, 2018 and was given a full military burial in Michigan. She earned several service medals and, on Oct. 26, she’ll receive the Sergeant Reckless Award from the museum during the Cowgirl’s annual induction ceremony. The award is named for the most decorated war horse in modern history. Lucca’s in good company; Sergeant Reckless also is memorialized in bronze at the park.